As many of you know I have dealt with depression for most of my life. I know many of you struggle with it, too. When Robin Williams died last week many were shocked. How could he do it? He had so much. He was so successful. Yes, those things are true but he also had the other side, the side that was sad and dark and lonely. I've heard so many of the people who knew him and considered him a friend say that they had no idea he was in so much pain.

That's pretty typical. Those of us with depression hide it well. When someone asks how we are, we answer "fine". We don't want to bring others down. We don't want to let anyone know how it really feels inside. Until I started blogging, I only let a few people inside my depression and even then I only let them in a little. I never admitted the dark side to any of my coworkers or casual friends.

The blog gave me a certain buffer. I could say things here that I couldn't say aloud to people I knew. I was amazed the first time I wrote about depression that I received so many supportive comments and that so many others were going thru a similar situation. Your responses have helped enormously.

I've thought a lot about response to depression, not only because I feel it myself, but because someone I love also deals with it daily. How do we respond to someone who is in so much internal pain? Most of the time we try to avoid it. That seems most natural. Try to make them laugh and get over it, but we all know that doesn't work and doesn't help.

In the awful aftermath of Robin Williams death, I've decided that the only answer is to face it head on. If he only knew that there were millions of people who would have tried to help him... If only.....

I've decided to talk to people about their and my depression, even though it's painful to do so. I need to get comfortable using the words depression and suicide. I need to let go of the anger that comes along with those words. I need to ask people who I suspect may be struggling with it how they really feel and how I can help. I need to let them know I'll listen and sit with them and do whatever it takes to help them get thru the worst times.

It's hard and it hurts, but it's necessary, because depression kills. 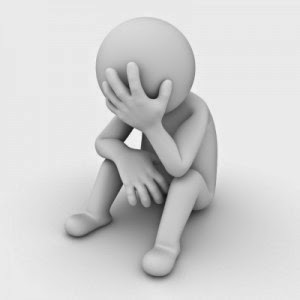 Mom Kim here - I wish I was home right now so I could comment more but this will have to do for now. What is it with siblings who say things like "Oh it's not as bad as you think" or "You just have to get over this". I think I use my blog to work through it - the Beaglebratz help me too plus just being a member of this blogging community. I watched a Robin Williams special the other nite - I wonder if he had been able to view the laughing, smiling, happy reactions of other people when they watched him if that would have helped him. I still can't believe he is gone - my head says yes, but my heart says not yet. Robin Williams was a great man - not just a great actor.
Mom Kim

It is an insidious condition. Suppose we're fortunate that we don't truly understand it. We can only observe it in others. It is so sad that people feel hopeless...

Thanks for giving us an insight.

We hear you and understand.

That's the best idea. I have clinical depression and if I don't take meds for it, I get so far down that nothing is right. It's a dark place. A very dark place. I can say as a suicide survivor (my brother did kill himself), nothing changes the mind of someone who wants to - the only thing you can do is get them to a safe place. As in Robin's case, I doubt any of our love and adoration would have changed his own view of himself. It's not something that can be affected by that. All you are is numb. Numb to any feelings at all, numb to life. I imagine that after years of suffering (I can imagine that he tried a good deal of the depression drugs), he was just very, very tired of "working on it". It's insidious. Harvey Firestien said correctly that "depression will hunt you down and try to kill you". Trying "one more time" with his new diagnosis probably just set him reeling.

But just because he couldn't be helped doesn't mean you can't. Talk therapy is great - it makes you think about things you never would have. And are you on meds? A lot of depression is like mine, an imbalance of chemicals in your body. Seek help, seek life and we'll be right here for you. Write to us - we'll do our best!!

Part of what makes it so aweful is that it's so invisible.

My heart aches for anyone who has to deal with depression. Thank you for your openness and know that so many of us are here for whatever we can in any way, small or big, to help ease the burden for you and others who may cross our paths and suffer in silence.

I admire your candor and openness about an issue that so many don't understand or even want to acknowledge. I've dealt with bouts depression throughout my adult life, and have good friends that struggle with it daily. But whether it’s clinical depression or the blues, a person who’s depressed is often looking for support, and I really feel strongly that your suggestions in this post is a great way to help. Thanks Sue, I'm also going to follow your suggestions....

I can't seem to get to the other comments, but I have suffered depression since my teen years and my heart goes out to you. But in one sense I can understand Robin's case. He was just given the load of Parkinson's disease, too. For the fast and funny guy, who would no longer be fast on his feet, no longer be a glib talker, it had to hurt very bad.I have known many who had this diagnosis and bravely
carried on until the end. But Robin just couldn't. I'll say a few prayers for him, like I do all my friends. Thats for you and yours too.

They call it the no CASSEROLE disease because no one showers you with casseroles and cards when you have mental illness. I think its time we change that!!!
Your post is brave and welcoming.

Bravo, Sue! Thank you for sharing your truth here. Mental illness is... illness, and shouldn't have the stigmas associated with it that it does. I am hopeful that awareness is happening and very real acceptance and change will follow.

I sure can relate to this post. Having suffered for my entire adult life with clinical depression, I would not wish it on anyone. I also know that without medication, I would not be here writing to you. Like you said, it is a very dark place. Like living life in Black and White instead of Color. Anyway, I applaud your honesty and stand right beside you to help in any way I can. One day at a time, my friend!