It's been a long 24 hours. Last evening I took Mac outside and when I came in Morgan was standing at the door. It was the first time she'd managed to stand by herself. I carried her down the steps, she wandered around a little, then I carried her back in. She settled down in the living room, but soon got up and walked to the water bowl. Then she slept till bedtime when I again carried her out and back in. She slept quietly all night.

This morning she needed a little help getting up, but walked to the door and managed the steps by herself. She had a drink and seemed a little interested in breakfast. I offered her some beef and rice mixed with some of Noah's special diet. She only ate about two spoons full, then went to sleep. 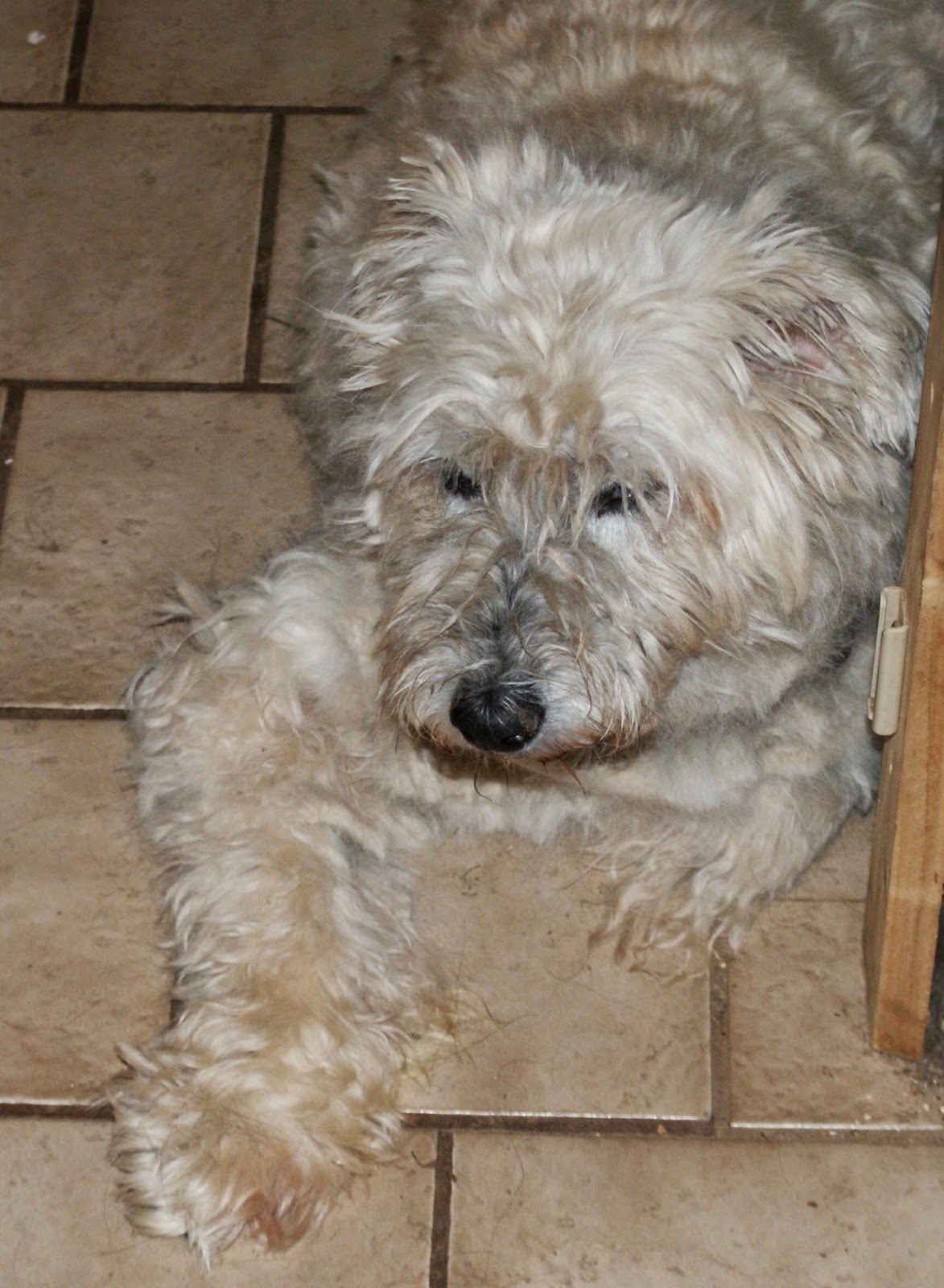 A couple times during the day she's wanted to go out to pee and has managed the steps by herself. At one point I offered her half a cookie and after a little hesitation, she ate it.

Finally it was time to head for the vet's office. The moment of truth had come, had the fever gone down? She seemed very tired but managed to walk into the office by herself to applause from the techs. Her temp was 104. OK we had dropped a degree, not what I had hoped for, but acceptable. After some discussion we agreed that it was probably better than that. Her arthritis meds she had yesterday probably knocked it down a little yesterday and after 24 hours the antibiotics were probably wearing off a bit and the fever was starting to rise again.

We decided to continue the antibiotics for six more days, then reassess her condition. She's to be encouraged to eat anything she wants at this point, until she's feeling better.  When we got home she had about half a cup of food and half a cookie. I'll be taking her temp each day around 3PM and we're hoping to see a steady decline.

I didn't get much sleep last night. I woke every hour to check on Morgan and today I'm feeling very emotional, on the edge of tears all day. We had planned to go out for a bite, but I don't want to leave her yet, so I may just go have a good cry and get it out of my system.

Meanwhile, here's Noah's incision and a shot of him in his spiffy shirt. 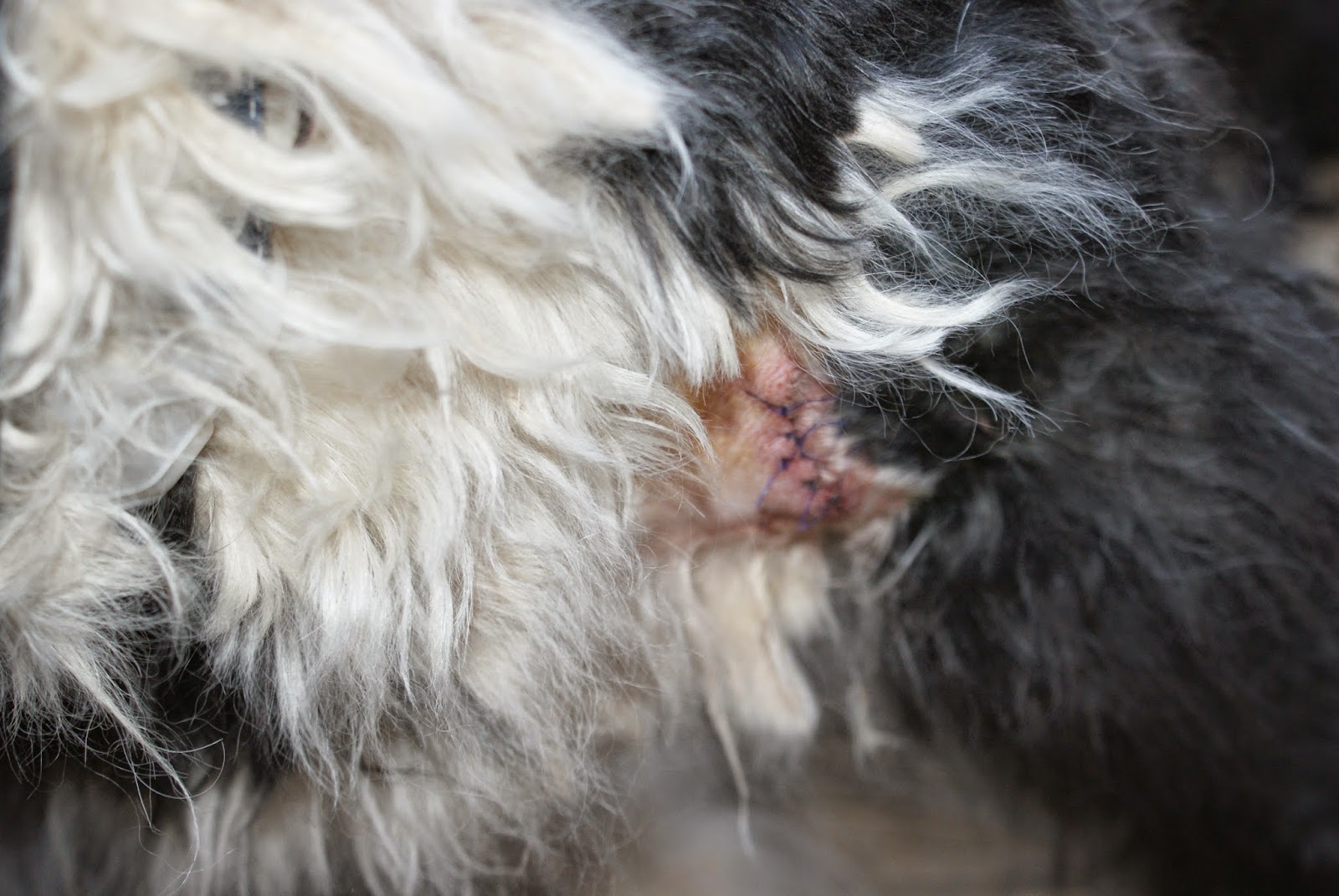 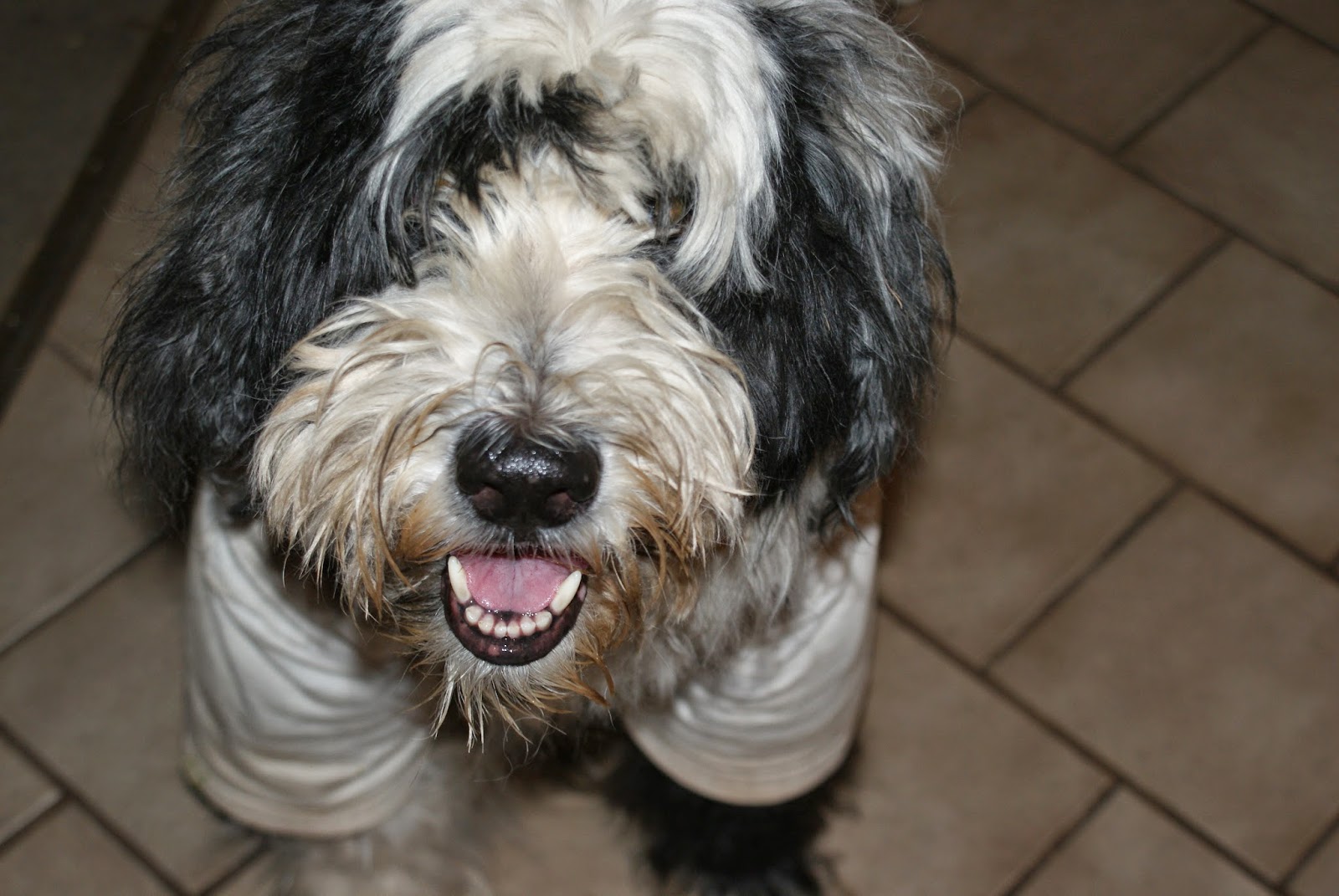 We glad to see you smiling, Noah!
And our paws remain crossed for you, Noah. BigHugs for you, Miss Sue ♥

We gots all our paws crossed here, try to keep smiling, us pups know how peeps feel!

Sometimes you need a good cry so you can pick yourself up and go again.

Paws crossed--still, for both pups.

As Mom told you earlier, one day at a time, and any progress is better than none. We hope Morgan is able to fight that temp and infection and feel a whole lot better. Hugs to you and Morgan.

Oh sh*t, sorry Sue that was my dad's reaction when he saw Noah's stitches. He's not so good with that sort of thing. But we both think his t-shirt is very cool. We're worried about Morgan too. But a degree down is good. We've got our fingers and stuff crossed for you.

Been thinkin' abouts you guys! Keepin' my paws crossed, and I am sendin' lots of AireZens you way.
Lots of {{{hugs}}}} and
Kisses,
Ruby ♥♥

Continuting on a POTP drip!!

Many prayers are being said for Morgan and we sure do hope that things are moving along! Hope Noah is healing well too. Big hugs to you all! Jeanne, Chloe and LadyBug

Prayers still heading in your direction. Any improvement is better than none at all.

Big hugs to you! We're crossing our paws tight that everything goes well.

It's so hard when our fur babies are suffering. We are crossing our paws for Morgan's fever to drop more and for the antibiotics to kick that infection!

Murphy & Stanley
Mayorz For All Paws

Catching up on your news. I'm so sorry to read about about Morgan! We're sending all the POTP for both she and Noah, but saving a few for our girl CarrieAnne. Take care, and let us know how it's going!! --And get some rest if you can, Sue!

Noah's smile made me smile too!

You take good care of you. Have that good cry, and know that all over there are crossed paws and good vibes headed your way.