We're about half way thru the treatment and like you, I'm curious as to whether this unusual treatment will work. I'm trying not to get my hopes up too high and also not to see things as I want to see them rather than as how they really are. 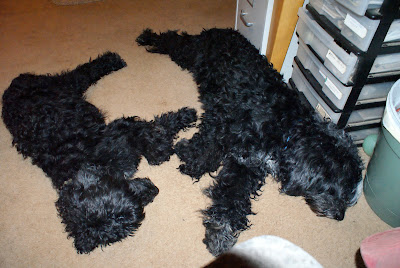 The home treatments have been less difficult and also less messy than we had anticipated. I'll leave it at that as the details are gross.

First Sky. Before the treatment started on Friday, he had no appetite and had to be coaxed to eat even a little. He's lost seven pounds since this started. He was tired and wanted to sleep all the time. When we went outside he didn't even take his beloved ball with him. His stool was liquid and he needed to go almost ever hour.

Friday when he got home I offered him some dinner, but he refused it. He did eat a cup of applesauce, then slept all evening. He only needed to poop once late in the evening and again his stool was liquid. On Saturday he ate his entire breakfast and a  can of tuna. When we went out in the late afternoon, he took his ball and chased it a couple times before lying down to rest. He ate his dinner and several liver brownies. This morning he ate his breakfast and drank a bottle of Boost. His stool is partly solid for the first time.

Now Samba. This girl has been fighting this for two months and has lost twenty pounds. Before treatment started she was starting to eat a little more and had regained five pounds. She was so weak that she couldn't get to her feet by herself and Rob or I would have to lift her whenever she wanted to move around. She tired easily and could only stand for short periods. Her stool was soft, but not liquid.

When we got home on Friday she ate her entire dinner and asked for more. Then she slept and didn't have a stool till morning. Saturday she ate her breakfast and we noticed that she was now able to get to her feet by herself without us lifting her. She ate several small meals during the day and in the afternoon wanted to play ball, but was too weak to run after it. She showed interest anyway. This morning after eating her breakfast she enjoyed a bottle of Boost and again went into the back yard with the other dogs. Her stool is very soft but infrequent.

So there we are, I'm trying not to read too much into what I'm seeing, but Samba is definitely showing some improved strength and both are more interested in play and in eating. I'd say this is an good thing.

What's next? Tomorrow they will both go back to the hospital for another treatment followed by two more days of at home treatments. Then we reassess.
Posted by Sue at 1:25 PM

When you what your ball, it's a good sign, here's hoping the poop gets firmer. Keep up theaeting guys.

Sue, that is so encouraging! Thanks for posting this update! We are rooting for you and your precious pups.

Oh, that IS good news! I'll be keepin' my paws crossed (and Ma has her fingers and toes crossed) that this continues!
YEA!

Hello Sue!! I'm catching up on your news and am intrigued by the treatment and will hope for it to be successful--all paws crossed!!

We will be hoping that this is the turning point. Saying prayers and sending love.

Glad your dad captured that subversive plastic bag. You have to be vigilant!

This sounds very encouraging. Eating and playing are two good signs. Have you tried probiotics? I can't remember. Pause remain crossed until we get the all clear.

Eating and playing are very good signs indeed. I hope you are finally getting some rest. I'm glad Samba seems to be regaining some strength. Hang in there. g

Well, we think everything points to improvement. That's what we want to see. Paws crossed the progress keeps moving along.

It seems like it rained here forever, but they say we only got about an inch.

Sue you do deserve a medal for your efforts. I do hope that the entire tribe continues to heal and feel well.

Howdy All, every improvement is fabulous no matter how small. We have all fingers and paws crossed here for continued improvement. Take it easy mates. No worries, and love, Carol (and Stella and Rory)

We are so hoping and praying that things continue to improve. Our paws remain crossed!

Sounds good so far... we have all paws crossed up here!

Any hopeful signs are good. I'm still rooting for your pups!

This sounds most positive and I feel very happy for that. I think you should get your DVM for dealing with this as you have. You know, no greater love has a pup owner than to feed them poop soup when needed.

I don't know why I missed this yesterday, but I did. I am thinking of you often and with love.
Jo and Stella

Good news and an interesting treatment - I'm anxious to hear an update.