Thank you to everyone who has asked how Samba and Sky are doing. Here's a little update on their conditions.

On Monday morning both dogs went back to the hospital for their second transplant. They were ravenous when they returned home.

Tuesday they seemed to be doing well until that afternoon I noticed blood in Samba's stool, a lot of blood. On Wednesday morning she was still passing blood and I sent a sample to Dr B. It seems that from the long period of diarrhea and the mechanics of the transplants, she had developed an ulcerated colon. He prescribed something for her and on Thursday morning she had a nearly normal stool with no blood. There has been no blood since though her stool has become very soft again. 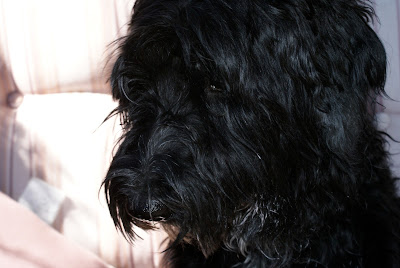 Her appetite comes and goes and it's a guessing game to figure out what she'll eat. One day she can't get enough of a certain food. The next day she won't touch that food and wants something else. Right now she finds her kibble mixed with sardines irresistible. Have you ever smelled sardines first thing in the morning before you've even had a cup of coffee? Don't try it.

Sky is slowly improving. He's eating well most of the time and his stool is getting slightly firmer. He's still pretty sick, but showing some signs of getting thru this. He's wanting to play ball and even chases it a couple times before he has to rest. 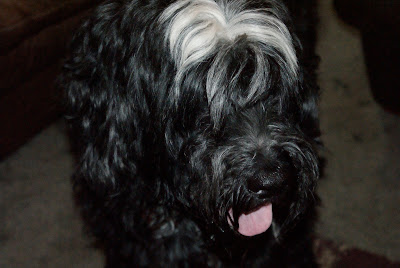 Although I wasn't very pleased with Bailey's initiative in serving dessert yesterday, I was happy to see Samba and Sky both gobbling up as many treats as they could grab. Stolen treats seem to taste better than any others.

Because Samba is taking high doses of steroids once again, she's starting to lose her hair. She has bald patches on her legs, tail and neck. It looks like I need to dig out her jacket and maybe knit her a sweater for winter.

We took them both for a weigh in this morning and Sky had gained about a pound, but Samba was still the same weight as on Monday. We'll have to stuff her over the weekend and get the scales moving in the right direction again.


For the time being we're just continuing what we've been doing and hope that they both keep showing some improvement. Dr B told me today that we need to concentrate on trends and not dwell on minor setbacks.
Posted by Sue at 10:21 PM

I sure do hope that both Samba and Sky continue to improve and eat!! My prayers are with you all.
xoxo Jeanne, Chloe and LadyBug

We are still saying prayers!

I'm still keepin' all my paws crossed that things will keep on this path of improvement. Your vetties right, focus on the steps forward ~ not back; And hope there are more of the former, than the later.
Moms: Sendin' you some special AireZens for your stress (and smellin' those sardines!!! YUUUK!)
That was Ma, btw, I think they smell yummers!!

Sounds like good advice. We're hopeful both dogs will get better. At least they're eating even if Samba is picky.

Good grief! Hope Samba's bleeding has not recurred. Hope it was 'just' an irritated colon, not a perforated colon. Glad to read Sky is steadily improving.

Paws crossed that you are on the right path and you continue to make progress - even two steps forward and one step back you will get there.

Love and woofs,
Riley (and his human)

What Sam said for me too!

What a frustratubg ordeal this has been for all of you, including Vet!

Love and prayers to all,

Sending them lotsa cyber hugs and love and wishing them all well soon. Hope you are getting some rest in between.

Thanks for the update - I've been concerned about them and hope that they can improve.

Get well soon guys, what's a few hairs here and there. You look just as beautiful anyway. Lots and lots and lots of luvs.
Freya Rose Blossom X

At least the update has more positive notes to it now. Poor Samba has been through so much, and now Sky too. We hope they continue to improve even if it is only a bit at a time.

I think of you often, and am glad that there have been some steps ahead, I so hope they continue to outnumber the ones going back!!

Our paws are crossed that good news continues!

Continued positive vibes being sent... and lots of love!