About ten years ago Rob bought a climbing rose plant and put it next to the deck in the back yard. For seven years it grew a little but never flowered. Then the next year it produced one red rose. 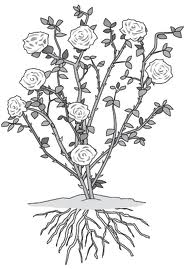 Last year it had about a dozen flowers during the summer. 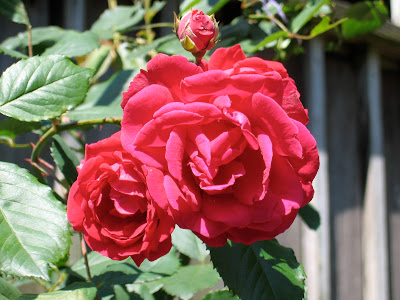 This year we had an awful summer. It was extremely hot and extremely dry and we lost many of our trees and shrubs, but the rose bush did put out some flowers. 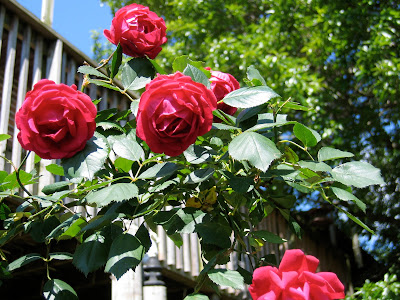 Now it's the end of October. The nights are cold, last night was in the 20s, but look what's happening. 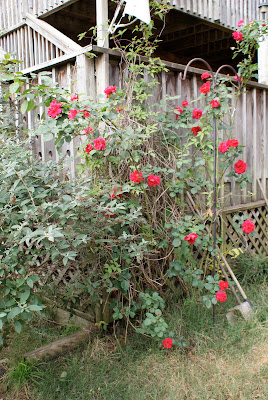 We think the rose bush is so grateful to have some cooler temperatures and some rain that it's rewarding us with this late display. Whatever the reason, we're enjoying it.

I think it knew you needed a little bit of joy after the tough month (and more) you've had. Maybe a sign of things gettin' better.
Smilin' October Roses.

We are with Ruby on this, the Rose bush felt sorry an is doing it's bestest to make you happy.

What a beautiful gift! Whatever the reason, I like Ruby's idea.

What beautiful roses! The cooler weather makes us happier too!

What a pretty rose bush! And, truly, after the horrible October you have had, dog health wise, you deserve this beautiful show of color.

Yeah, it's funny when plants decide to flower at strange time. It's beautiful.

Very pretty. For some reason our roses are still blooming too. Mom checked them today and was amazed that they were still so pretty even after the bitter cold we had overnight.

You do deserve some pretty flowers in your world right now! Do you cut some of them for inside?

Its 28 degrees tonight and the weather people are predicting snow, so I wouldn't mind a vase of roses in my house one bit!

Jo and the petz

It sure did fly by!
Snorts,
Benny & Lily

Funny... we went out to dispose of all the dead container garden plants yesterday in preparation for Sandy and guess what? My little mini carnation plant is looking GOOD! A few flowers, but very green leaves/stems... looking much better than it did all summer.

What beautiful Roses! I've had terrible luck with mine. I think it's just too hot during the summer in the spot where mine are growing. They do perk up a little during the monsoon. Pats to all the pups! I hope Sky and Samba are having a good day!