Wow, Fudge and I want to thank you. We've received so many comments and emails and phone calls about the boy. I've been trying to answer them all but I have been pretty tied up with disabled dogs for the last few days. It seems that no sooner do I take care of one than another needs something. We'll get into a routine eventually but for now it's controlled chaos.

So here's where we stand. Sebastian is doing much better. He's eating normally now and the vomiting seems to have stopped, at least for the time being. We're keeping him close to us as soon as the sun goes down and the booming starts. He's still taking Prilosec and Dr B prescribed valium twice a day till we get thru the noisy season.

Morgan just goes on as if nothing has changed. She has her own routines and I try to keep up with them. Her favorite time of day is 9PM when she gets her milkshake, and I'd better not be late.

Then we have Mr Fudge. He was walking across the room on Wednesday when he collapsed and started shrieking. He couldn't stand up and once I got him calmed down a little it was obvious that he couldn't move his back legs. By the time we got to the clinic, he was able to use his right leg enough to stagger, but he was dragging the left leg.

He had an injection for pain and an IV of steroids and xrays. It seems that a bit of cartilage broke off and entered the bloodstream.It injured the spine giving him a spinal stroke. Dr B says we may see some improvement over the next six weeks, but he'll never be back to normal. This is a big blow to a boy who loves to run, jump and spin.

Yesterday was not a good day for him. He was having trouble walking. He did have his appetite back but I knew how unhappy he was because as he rested on his blanket, he kept making little grumbling noises, half growl and half moan. He's very unhappy about this whole situation. 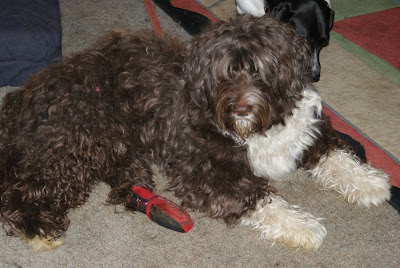 He doesn't want me out of his sight. We're keeping him leashed so that he won't try to follow me up or downstairs. One of us is always close by in case he needs us. Trips outside were a problem. At first we tried the towel under the hips thing but that didn't work too well. I remembered a special harness I had for Morgan when she tore her knees so we're using that. It has two padded loops that go around his legs and a strap that attaches to his collar. I can hold the strap to help him on steps and to balance him as he walks.

Since he's dragging the leg, I was afraid he'd injure the top of the foot. I found Samba's boots that she wore when she had a foot injury. They're tall thick boots designed for disable dogs. They zip on and then have velcro straps that wrap around the leg. I had no trouble putting one on him because he has no feeling in the foot or leg. I put it on while he was sleeping and he didn't even know I was doing it.

Today, day 2, is a little better. He can walk unsteadily, though he falls a lot. Learning to walk again is hard work and he can only take a few steps before he has to sit and rest. You can all imagine how heart wrenching it is to watch him struggling. He was such a very active dog.

I'm hoping he's starting to accept the way things are and that some of his happy personality comes back. I'll be talking to his vet this afternoon and may have some more ideas on how to help him. For now we're just taking things one wobbly step at a time. 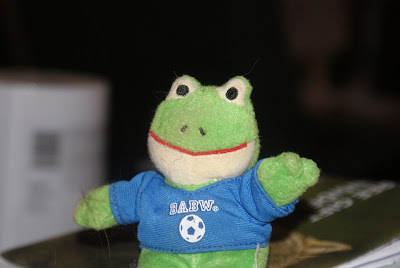 Howdy mates. We'll keep paws crossed here for you all. Hey Fudge, you and Rory could start a wonky walking club aye mate, hehe. Try not to worry (says mum, who hasn't got a grey hair on her head. Well not with all the hair colour she uses, bwahahaha). We'll keep you in our thoughts. No worries, and LOVE, Stella and Rory

We all know how hard you work to keep all your pups in good health and to help them when they are ailing. So of course, we are here to support you when the going gets tough. We are all pulling for Fudge, and Sebastian, and Morgan, and anyone else who comes along and needs some crossed paws. Hope the weekend shows things getting a little easier for Fudge.

We continue to send you lots and lots of AireZen, Fudge. We want you better, buddy! We send all of you tons and tons of positive and healing vibes.

Oh Fudge! We are sending you extra-strength POTP...Us dogs are pretty good at adjusting to stuff, so we hope that you and your humans can figure out how to help you be most comfortable. At one point Bart was going to this rehab place where they had a treadmill in a water tank. He loved walking on it PLUS they gave him treats...One day when he was there there was another dog who had had a spinal surgery and was told she'd never walk again. Well, she sure was walking on that treadmill and loving it. We're also sending hugs to your mom cuz we know this is hard for her, too.

Hi, we hope that things are a bit better today. Swimming and leg stretches will help. Swimming will enable Fudge to be in a "weightless environment" and help him to recall that he needs to move his limbs. Stretching will keep his tendons loose and supple. We're thinking positive thoughts for you and Fudge.

Oh noes!!! Fudge, I am so sorry dude! I knows you will do betters, butts it might be a tough go for a while. I am sure your Moms will figure out how to rehab and make you mobile again! I gots my paws crossed real tight for you Fudge!!! And sendin' TONS of AireZens!!!!
Um...did somebody say 'milkshake'?????? ☺
Kisses,
Ruby ♥