I have started to dread July 4th and not only the 4th, but the first couple weeks of July. As you can probably guess it's the fireworks and accompanying noise that causes this feeling. 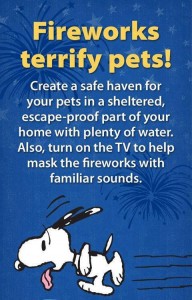 You may remember that Sebastian turned up on the 4th of July, three years ago. He was then and continues to be terrified of loud noises. This week has been  a nightmare for him because we've had many thunder storms and also some of the people on the street have been shooting off fireworks. They can't wait for the designated day, they have to annoy everyone and terrify the animals for several days before and after the 4th.

Last night I sent the dogs outside around 9:45 for their last outing of the day. No sooner had they walked out the door than one of the obnoxious neighbors shot off some fireworks. The dogs all came running in completely panicked. It took quite a while to calm them down and get them settled for the night. Then at 2AM, Sebastian woke me. He almost never wakes me so I knew it was important. I took him outside and we walked around the yard but he didn't do anything so we went back inside. We went out a second time and still he just walked around.

About ten minutes later he was asking to go out again, so Rob got up and took him out twice, but he didn't do anything. After settling down to sleep I noted that Sebastian was still restless. Then the vomiting started and it continued over and over again.

When the clinic opened we took Sebastian in to see Dr M. I was afraid to treat his nausea because of his pancreatitis and needed advice on what to do. Sebastian didn't greet everyone with hugs as he usually does but just curled up on the floor looking sick.

Dr M examined him and said his temperature was normal, his pancreas wasn't painful and he didn't seem to be having a pancreatic flare up. Instead she diagnosed stress ulcers. He received an injection for nausea and came home with nausea medicine. He's to take Prilosec for a month and eat the homemade food for several days starting tomorrow. She also gave us a referral to the emergency clinic in case he gets worse over the weekend. 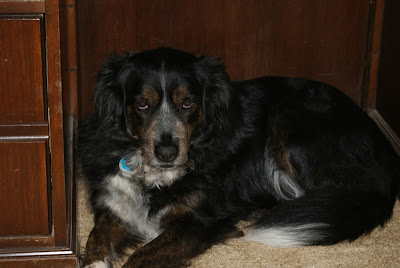 Once we got home he vomited a couple more times, then developed bloody diarrhea. I called the doc and she added an antibiotic and probiotic to his routine. He looks and acts really sick and just wants to lie next to me and be gently stroked on the head.

Why can't people realize that not only dogs, but young children and people with stress disorders and others are all bothered by the noise of fireworks and show a little consideration for someone else for a change. Just because you can do something doesn't mean you should. Maybe stop and think about the consequences of your actions for once in your life.
Posted by Sue at 2:49 PM

We HATE fireworks as much as all of you do! We hope you'll be okay, Sebastian. Paws are crossed!

We couldn't agree with you more. We hope Sebastian will be OK. The worst is probably yet to come with tonight and tomorrow night ripe for more fireworks. We are watching Ciara closely too.

Fireworks don't bother us....not that we're left alone when they go off. People just seem to go nuts with fireworks. Recently saw a sign on Facebook...."Returned serviceman from Afghanistan....please be considerate with your fireworks." So not only animals are affected.

The oh Sebastian! Come hang out in out air conditioned, music playing, ceiling fan on waaay high safe place for the 4th. We're OK with booms, butt previous pack members have not been.

We understand how you feel and the effect that fireworks can have on dogs. Sam and his brother Owen, are particularly sensitive to fireworks and thunder. Both of them shake and pant heavily, eyes darting about and run frantically around the house until I can grab and hug them. It's pretty bad. We've turned up the TV, played music louder (why are we listening to ABBA?????). We live a short city block away from a park and the city has a community event each Halloween when they, (wait for it) light off 15 - 20 minutes worth of fireworks with our tax dollars!!! Scaring the s**t out of pretty much every animal that lives within earshot of the explosions. I'll tell you what Sue, come on up for a week around the 4th next year, bring the kids, Canada's nice and Vancouver is friendly. I'll have to figure out how to explain the sudden increase in the doggie population but WTH, by the time the City sends out inspectors, you'll be safely back home and the 4th will have passed.

Hailey hates them and can get to be hyperventilating. We have found her thunder shirt and giving her safe places in closets have helped. Unfortunately because we live in cottage country we have to put up with them 3 or 4 nights a week in the summer. (even though most are illegal). Sigh!

Oh noes. Sebastian I am so sorry those idiots are settin' off those big bangs in your hood!
I thinks I really need to come and stay with your guys (for the biscuits and cupcakes) and help you out...I'll catch that little bugger that is eatin' all your biscuits and chase those annoyin' peeps away that are settin' off those bangs! Trust me, when I bark I looks like a crazy dog!!! BOL!!!
I'll gets my Transport Tunnel ready...
Kisses,
Ruby ♥

Hope Sebastian is settling down today....... We hate the jerks who set off fireworks all day and night too. Wish NH would make them illegal -- we have 3 HUGE fireworks stores near us -- absolutely hate them.