When I was at the store a couple weeks ago I saw these cute doggy treats, but at $5 I was able to pass them up. I guess everyone else did, too. Today they were marked $1.50. I thought that was an acceptable price and I knew the dogs would love them. 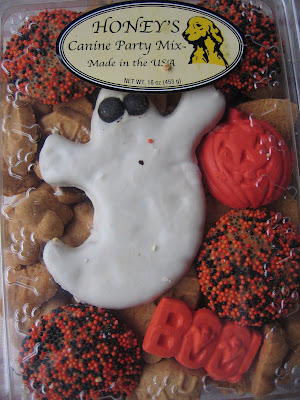 I often hear of households with same sex dogs that have terrible problems and fights that cause injury. We have a lot of dogs and for the most part they get along well. The worst problem we have is between Monty and Fudge. Monty was born to guard things. Fudge was born to steal. Put the two together and there's a problem brewing.

When Monty has something, a toy, a treat or his favorite, a piece of paper, he sets his prize next to him and growls at anyone who comes near it. The other dogs ignore him, but Fudge takes it as a personal challenge. It becomes his mission to steal Monty's prize. When I'm there, I keep an eye on the situation and if I feel it's getting out of control, I step in. I may distract Fudge with a prize of his own, put him in another room, or remove the object that they both want.

When I leave the house I sometimes put Monty and Fudge in different rooms or I at least make sure Monty doesn't have something to guard while I'm gone. 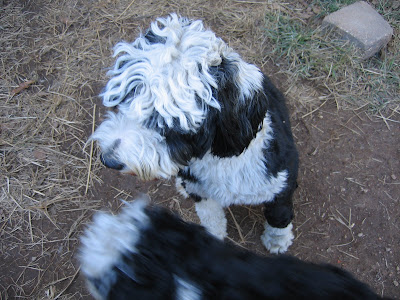 Sky and Noah are litter mates and get along great. Although Sky is the largest of the pups at 64 pounds and Noah is the smallest at 40 pounds, they're best friends. 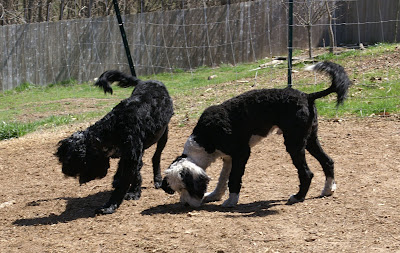 I snapped these one day while they were playing together in the yard. 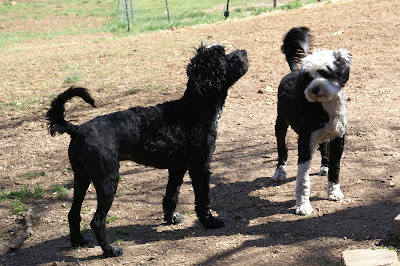 Sky used to try to steal Noah's food, but one day Noah stood up to him and that was the last time it happened. Now when Sky finishes eating, he waits patiently for Noah to finish. 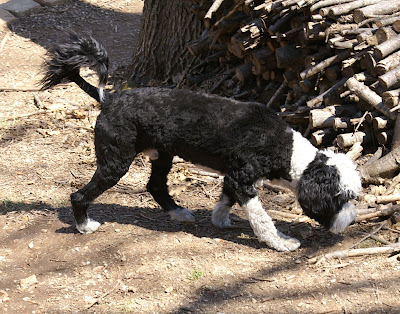 The pups were raised together and even crated together. They've always had each other for playmates and though they often enjoy wrestling , there has never been a fight. 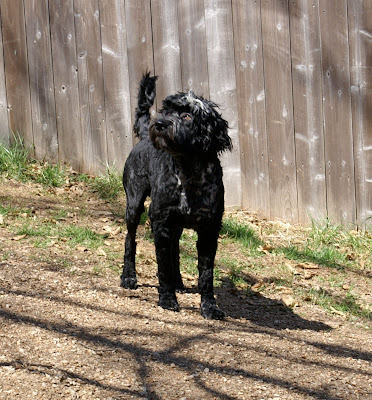 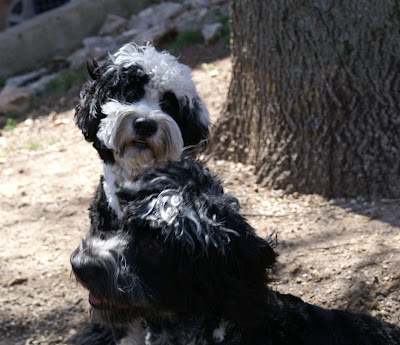 I guess we're lucky that our canine family gets along so well. 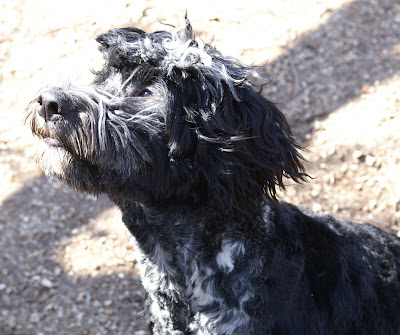 Oh,your doggies are CUTE! What a pack! We have an English Bulldog, golden retriever and a ragdoll cat. My mother was a wonderful quilter and could crochet beautifully. I sadly didn't pick it up. Thanks for dropping by my blog.

Hi Sue - thanks for visiting my blog and taking the time to comment. You have some very cute dogs there! And I don't know how you have the patience to finish such a huge Afghan blanket!

oh these doggies are adorable, so you have 11 dogs, boy i envy you.
i am so overcome with emotion that you like my art so much and, no, i have never sold any of it...e mail me at jossross@yahoo.com and tell me which you like, and you can give a donation to cancer research or any charity of your choice, for the amount you think they are worth...i am not an 'artist' i just play and have a tremendous amount of fun!

Mine have never been in a fight either. I don't know if we are lucky or if the careful introductions and training have paid off!

Mugsy was both thief and guard. He'd guard his own, and steal Fred's if he got a chance. Must be a Jack thing, because Gretchen tries the same, but we aren't allowing her to steal from Sissy, nor do we allow much guarding.

I'm glad your pack is amiable!