We had our first snow today. We've had flurries in the air a couple of times, but today we had snow that stuck to the ground. It was only a covering, but for the dogs that was enough. Samba, Fudge and the pups raced around like crazy dogs and licked the snow from every flat surface they could find. They chased each other and even rolled in it.

Morgan strolled around licking the white stuff up now and then. Tsar lives for days like this. He did not want to come inside. He ran and tossed a stick in the air and chased the pups and the only way we could get him in was to offer him a ride in the car.

Then there was Monty. Monty hates rain and snow. His first winter when he was almost a year old, he decided that he would not walk in snow, he would just hold it till the snow was gone. We had a pretty heavy snowfall that year and Monty refused to go outside for two days. Finally, he was so uncomfortable that Rob shoveled a patch on the front lawn so that Monty didn't have to get his feet wet. What a relief !!

We have since that time come to a compromise. Monty goes out first thing in the morning just long enough to take care of his needs, then he stays inside, warm and dry until just before bed, when he runs outside again. 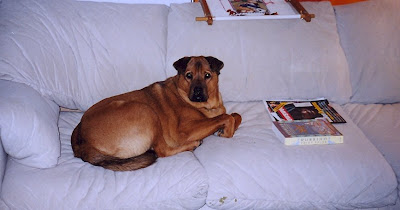 Here is how Monty spent the day. No cold, wet feet for this boy.
Posted by Sue at 10:56 PM

Again, I'm so glad Monty found you. Sweet photo! Sissy licks snow too. Oddly, Gretchen doesn't seem to mind snow, but a cold rain? Icky. Sissy and I had to stand out in the rain while Gretchen, in her sweater, pranced around on the front porch until it was time. Then, I picked her up, carried her to her favorite spot, she circled, did her business, then RACED to the front door.

I'm not sure why Sissy and I had to stand in the rain for the WHOLE production, but it was the only way to keep Gretchen outside at all.

Dogs and snow what fun! I could stand and watch them forever, no snow here yet, only in the mountains.
Sue I think you will do fine making some applique pillows, they are so much fun to make, it's like drawing a picture with fabric. I would love to see them when they are done.
Hope you are enjoying your Monday.
x

oh monty what a happy chappy you are on that lovely big sofa.