Yesterday, after a good night's sleep, I felt so charged up that I just knew I could accomplish a lot. And I did. After feedings and outings and my own breakfast, I got the usual morning office work done. I started on the laundry, then I tackled some UFOs.

The snowflake afghan has been waiting for a month to be fringed. The actual knitting has been done for quite a while. For some reason, I just couldn't make myself sit down and finish it. Yesterday I did it. 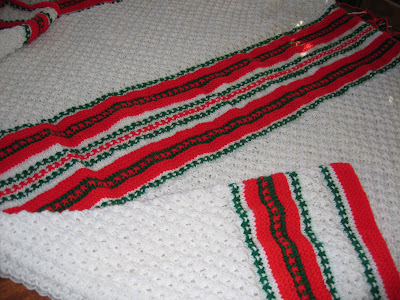 This is one of my favorite afghans. The stitch is really pretty. I increased the number of stitches by 100, because I wanted a nice, big warm afghan. 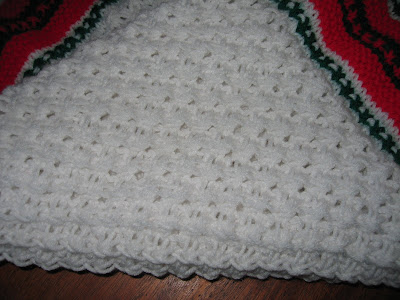 Here it is all done and ready to be sent off to it's new home. It's a gift for a special lady. 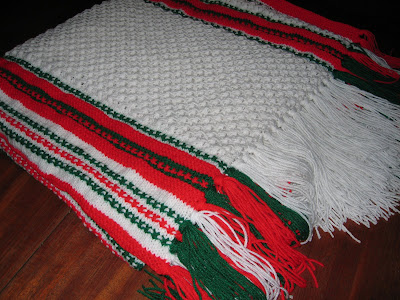 While charged up, I finished another project, too. It, however, is a Christmas gift for someone who reads this blog, so I can't show it yet. I did take photos and later will let you in on it. For now it's just a mystery gift. 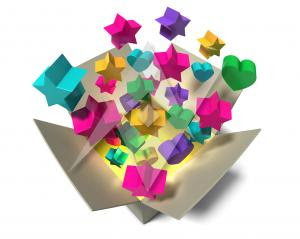 Last night, after the dogs were fed and settled down for the evening, I made a cup of tea and worked on my candy cane afghan. Of the many afghans I've made over the years, I've never made one for myself. They've all either been requests or gifts. When I saw this one, it looked like fun, so I decided to make it for us.

It probably won't be finished by Christmas, but that's ok. Afghans are nice mindless projects. Once you memorize the pattern, they can be worked on while chatting or watching TV. There's no shaping to worry about. They can be put down for days or months and picked up again when the time is right. 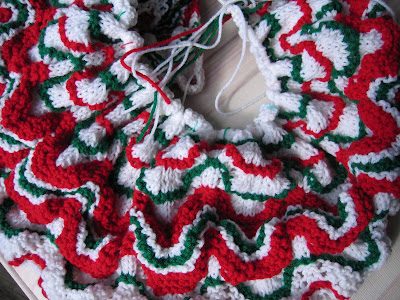 I don't know how big ths one will wind up. I guess when I run out of yarn it'll be finished. 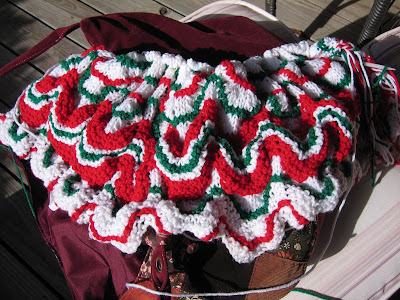 There's a dog show here tomorrow and I was going to show Fudge in conformation, but after his bad behavior at the obedience trial last month, I changed my mind. He went to the spa anyway, because he's kind of smelly. It also gives the others a bit of a vacation from him. He's the chief troublemaker in the pack and when he's away, the house is much quieter. 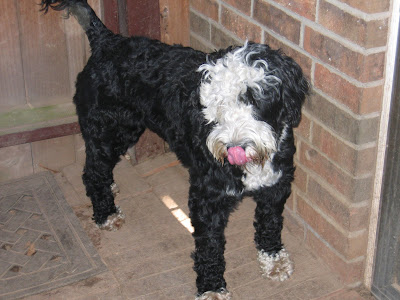 Norma Jean wanted her picture posted, so here she is after savoring her breakfast.
Posted by Sue at 11:52 AM

looks so good to me, i also love knitting and crocheting and keeping busy, when is your birthday ms aqua? i am 4th february.hugs.

I'm convinced the dogs help you with your projects. You're just too productive for any other explanation!