Monty is our 'Enforcer'. He's a big boy at 85 pounds and can be frightening if he's barking at the front door, but he's actually a pussycat. Monty was terribly abused as a young puppy and still lives with the scars, both physical and emotional. He has nerve damage in his face from the severe beatings he endured and his refusal to chew makes me think his jaw was injured, too. 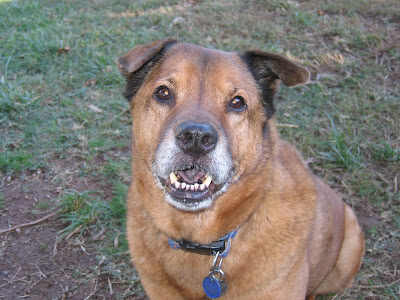 Monty is afraid of people, especially men, and tries to keep them at bay by acting tough. It works. Most people are afraid of him and it takes a very special individual to have the patience to make friends with him.

Monty lives by a very strict set of rules and thinks everyone else should, too. He tells the other dogs what not to do, where to lie down, when to drink. He doesn't like any of them, except Morgan, to invade his space and tells them so with a low growl. 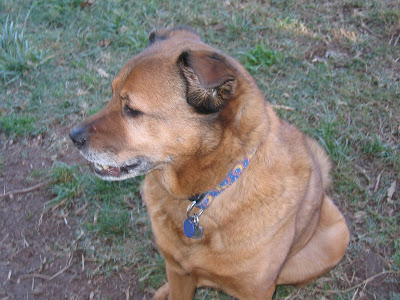 Puppies are another story. Monty loves puppies. He lies on the floor and lets them climb all over him. They can tug his ears and chew his feet and he never gets rough with them. He has played gently with each of the pups we've brought into the house, but when he met Samba's babies, he just knew they must be his.

He spent hours sitting by their pen in the kitchen, watching them. He wouldn't let any of the other dogs, except Samba, near them. He was in heaven when we let them out of the pen to run around. Anyone who doesn't know Monty would be amazed at how gentle he can be.

Monty guards everything. Being a Chow/Doberman mix, his instincts are to guard. He guards toys and objects, but he also guards the other dogs. When Lucy was alive, Monty was very jealous of her and tried to push her away if she was getting petted, but if one of the other dogs got too close to Lucy or was too rough with her, Monty got between them.

At night Monty sleeps on the floor next to my side of the bed. He is guarding me, and the other dogs have to get past him to bother me. 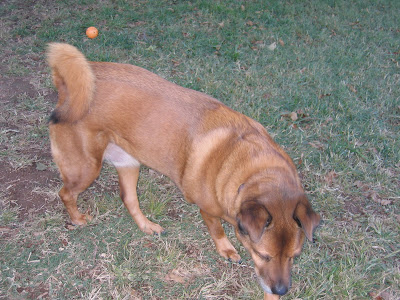 I hate to see the gray in his muzzle and think about Monty being ten years old on his next birthday. I wish that he could relax and enjoy life a little more without always being on duty, but he takes his job very seriously.
Posted by Sue at 2:22 PM

I'm betting Monty is old school and feels loved and useful when he's "working." In return of course, he's saying how much he loves his pack when he's working!

Thanks for giving us a glimpse into his personality. What a special boy...

i know what you mean about him. we see our pets as more human than humans and we want so much for them too. happy dot. have i got your snail mail address? am not sure, send it to me please e mail, and i will send your art over this weekend.

Hi Monty - good to meet you. You are a very handsome boy who is so good at your job. What happens when the puppies get big?

Sue, I know I have your email address, but I can't find it. Really, really want to thank you for your support on my quest to help make shelter and old dogs comfortable this year!

You have no idea how much I appreciate your putting aside your personal gifty knitting to make something for a dog. Especially when you hands are bothering you. Hope that works itself out soon - that is no fun at all! g

Oh what a beautiful boy! I see the color and tail curl part of the Chow in him, exactly like our chow, Coco..I'm glad he's being loved even though he works too hard, he just aims to please :)
Give him lots of licks and pet from Lady, Coco & I.

I firmly believe that there is a special place in hell for anyone who could abuse a dog (or cat) like poor Monty was. Monty has sure lucked out in finding you for a forever mom!