We live on a private street. We own it along with our across the street neighbor and we're responsible for maintaining it. We pay to have it resurfaced and we have to pay to have it plowed in the winter. 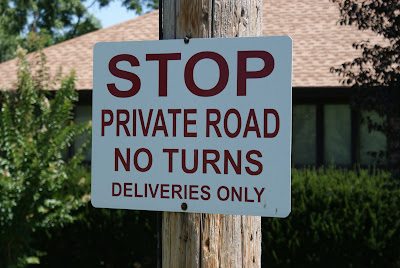 There is a dead end sign on the next street before turning onto ours and we have these signs posted on each side of the street. 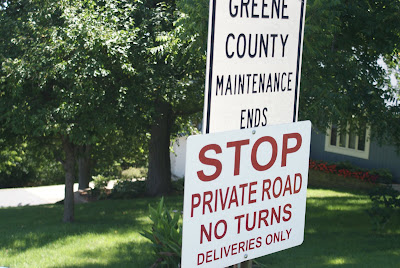 The year after we had our fence put up someone came down the street during the night and hit the fence. They left part of a broken taillight behind, along with $750 worth of damage to the fence.

When we had the repair done we had the fence company install six heavy posts sunk in concrete and filled with concrete. That way if someone hit the post they would probably damage their car, but not damage the fence. 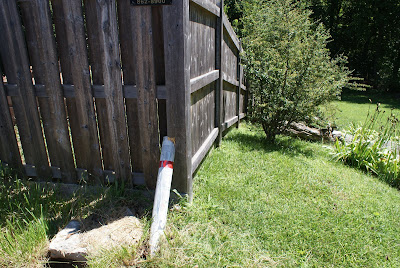 Today while Rob was in the back yard with the dogs, in broad daylight, someone came down the hill much too fast and didn't even try to brake. They hit a post, knocking it out of the ground and into the fence. 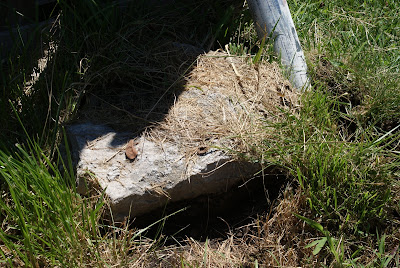 By the time Rob got out thru the gate they had turned around and were speeding away. He waved his arms and tried to get their attention, but they tore out of here. 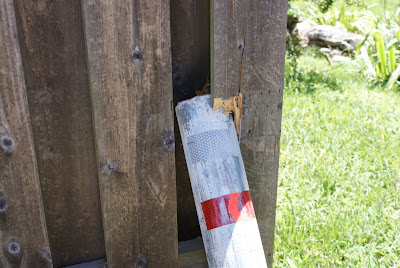 The damage to the fence is minor. One board needs to be replaced and two were knocked out of position and need to be pounded back in place. The post needs to be reset in concrete.

The good news? They left this behind. 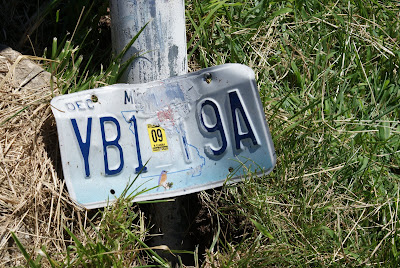 They knocked their license plate off the car when they hit. We called and a State Trooper came out right away. He called in the license and the car is registered to a man on probation for drugs and assault. The trooper is going to his house to speak to him about leaving the scene of an accident. Good!!

Why do people think it's OK to damage someone's property and just drive away? My dogs are safe because the post did it's job, but can't anyone read around here? What about reading signs? Why are you traveling at such a high rate of speed on a dead end street? Don't you even care about your own car?

That's awful. People have NO respect for private property.

That's pretty cool that you own your own street, though. That's unheard of here, as you can imagine.

I don't like them, either. They are idiots! Thank goodness no one was hurt. I mean you and the doggies. To heck with the bad guy!

Awesome getting the plate! At least they will hopefully have to own up to it. I don't know why people do stuff like that either. But at least everyone is safe.

Wow! He gets to share the stoopid award with Bonehead Beauregard. I can't believe some people. Don't forget to add the damages to the hit and run claim. :) g

i am just so glad that (for once) they will get caught and punished (hopefully) as so many peole get away with crime!! and that really upsets me. thankfully no one was hurt and this tory will have a good ending! i am glad!

Thank goodness the dogs are safe and the damage to your property was minimal. We have a similar problem at home AND work. It's not okay to toss trash out on country roads either, while I'm fussing.

I'm so glad karma was on your side this time.

People are selfish morons. It's a good thing you protected your dogs and yard. We had to fence our property years ago - and put up gates - to stop people from driving up our driveway partway, then over our lawn, to cut out 1/2 mile of driving on the street. I shot out someone's taillight with a BB gun when he was doing that and my kids were playing in my yard. Then the gates got locked. Can you put a speed bump at the entrance to your road? People don't like those.

I am LOL about the license plate! Karma IS a bee-atch, isn't it? People are just so rude, with no respect and they all think they have the "right" to do as they please. I am SO glad you caught the rat... and hope the officer gives him a sitation for leaving the scene and you get your $ for fence repairs!

we don't like bad people either. our brand new and expensive landscaping was vandalized right after it was put in (this was a few years ago). mom cried for a week. what was the purpose of harming a tree? we just don't understand it at all.

I don't like bad people either Sue and it does seem like there are more of them around. Thank goodness our doggies and you two are both safe. At least he is a stupid bad person and left a really good clue to find him. I hope it all works out well.
x

Stupid people - but at least this time you caught them. Not sure with the past history if they will have any money to pay for the damages. Hope the future treats you better.

Thank goodness no one was hurt! What a dummy with no respect!
We're so glad he left his license plate for you to find!

That is HORRIBLE! I am so glad no one was hurt and that you got the bad man. Hopefully this will never happen again...

What an idiot. I'm not surprised the stupid guy is on probation. It's a good thing you had those concrete posts!

What an idiot, and I see it as a blessing he did not stop for your husband, as being a violent person already, I'd hate for your husband to have come face-to-face with him!

Miracles happen every day, and I'm glad that plate fell off the car. Way to go fate!

I'm also glad to have seen, HE ended up paying for his damage. LOVE seeing justice served *G*