We had a strange morning. While I was getting breakfast this morning Sky found a little doggy toy that had somehow escaped their notice until now. It was a small orange teddy bear that I bought when the pups were little. Because of the size, the pups were able to carry it around and would fall asleep on it and I had put it somewhere safe until today. 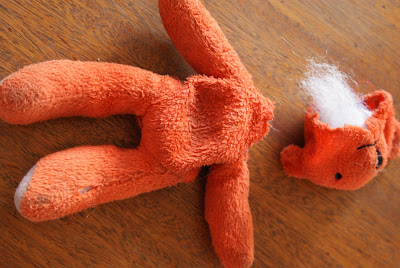 Sky declared war on this poor little bear and after pulling most of the stuffing out of it, (it's always amazing to me how much stuffing the Chinese can cram into one of these toys) he proudly presented it to me in this condition. Oh well, it was a dog toy after all.

Our dining room looks out on our porch and side deck and we enjoy watching the birds at the feeders in the morning as we have breakfast. We get a lot of Goldfinches and Cardinals and our regular cleanup crew of Mourning Doves who pick up the seed the other birds drop.

This morning as we enjoyed our second cups of coffee, we were both startled to see a very large white dove strut along the deck railing and look in the window at us. 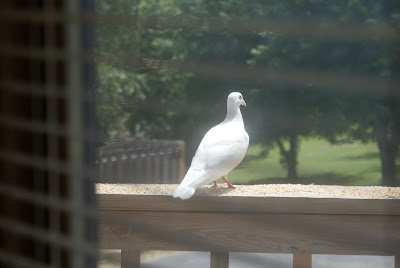 She was almost twice the size of the Mourning Doves and pure white. I have never seen one in the wild before. The only white doves I've seen were domestic birds kept as pets. 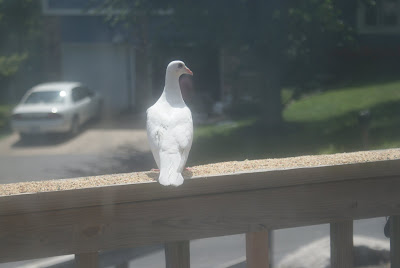 She spent quite a bit of time on the deck, then flew off, but returned so that I could take pictures. While she was gone Rob put some seed out for her and when she returned she seemed pleased to have some lunch. 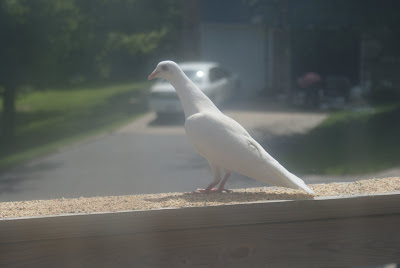 We don't know where she came from or if we'll ever see her again, but she was a very pleasant visitor this morning.

One of the first pieces of art that Rob and I bought after we were married was a stained glass dove. 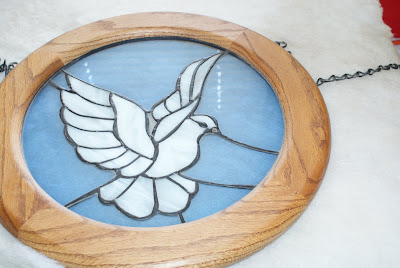 This is a large piece that hung in our living room in Maryland and will probably wind up in the new library in this house. 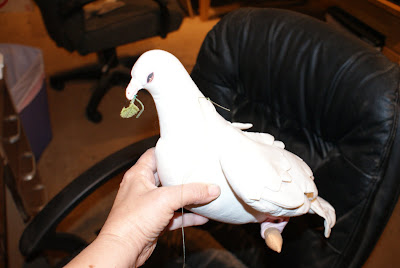 I gave this cloth sculpture dove to Rob for Christmas one year and it will hang in the guest room soon. White doves are special to us and seeing a live one at our own home today brightened the whole day for us.
Posted by Sue at 1:38 PM

Those are some pretty birds. If I were there, I fear I might try to play with them. It might scare them, though.
Sally Ann

My dogs - especially the terrors/terriers - have always torn the stuffing out of their toys. Sissy will do it once in a while too.

How special! Everyone here has retreated to a private resting spot after repeated birthday celebrations.

i do so love the realtionship you and rob share, it seems very special.

What a pretty bird. I've never seen a white dove in the wild, either. Could someone have gotten one, decided they didn't want it, and let it go?

TD just totally destuffed his flamingo. All he wanted was the squeaker:)

That was a beautiful dove, the symbol of peace. Wonder if she was carrying a special message.

Thankyou for stopping by our blog..We are deeply saddened by the loss Of our Senator Kennedy. And we are so worried about Splash and Sunny..they were his everything...What are they going to do without him??? Oh dear..we are so sad..Love Agatha and Archie

The dove will probably come back to you since you fed it. Beautiful bird!

I love your handmade dove, too. Did you create it on your own or did you have a pattern?

What a lovely treat for you. Beautiful bird. I'm glad she came to visit you.

Beau does that to his toys all the time and then Lucy "presents" them to me for fixing. g

How wonderful to have found your blog! The post on Senator Kennedy was so nice. A dear friend in York, PA raises homing pidgeons (white doves) just like your lovely guest. I am certain she enjoyed your snack on her way home.

That is a bootiful birdie... think it would taste like chickin'?

Mom was thinking homing pigeons too! What a beautiful bird to have visit you!

I'm glad you had a very special visitor! Beautiful bird!

White doves are very special - as you say a sign of peace.

It was sad about the stuffie when you had had it since the dogs were pups but as you say it was only a toy - we feel sure you could stitch it back together again!

wowie. those are nice birdies. we chase most birds away from our yard, except the hummingbirds. they're not scared of us. mom wishes we had more birds (in the yard), but it's not going to happen.

that's a good job on the teddy bear. it's so satisfying to destroy a toy. good job.

We had some de-stuffing at our house over the weekend as well....