Hi, I'm back. First, thank you to everyone who sent healing vibes my way. I wasn't going to mention my little accident because my vanity keeps me from wanting to broadcast my clumsiness, but Rob posted about it and told me a day later. Oh well.

Tuesday morning at 5:30 I was heading out to feed the dogs. If I could only convince Tess to sleep a little later! There were no dogs around, I was all by myself so I can't even blame them. I was walking down the steps carrying ten dog bowls and I missed the next to last step.

The damages are minor. The left foot is swollen and bruised but today I was able to get a shoe on it, and the right knee is very swollen and doesn't bend very easily. I have been lying on the couch with ice packs on the boo boos, and using crutches to get from there to the bathroom and bed. Today I can navigate with just one crutch.

Now on to more interesting stuff.

This is a symbol for my pet peeves. Today I'm going to share a couple with you.

Don't you hate the way the press is all over a story, any story, giving non stop details day in and day out until another more sensational story comes along, when they totally drop the first one and you never hear how it was resolved? One would think if it was so important that they had to talk about it day and night for days or weeks, it might be important enough to go back to and let the public know how things wound up. 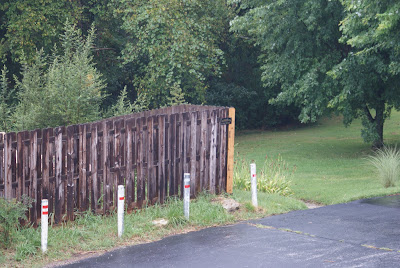 Here's the resolution to one of my recent posts. Our fence is repaired and the bad man whose car broke it paid for the repair.

Another of my posts had a good ending. 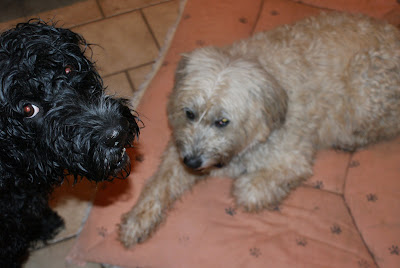 The last time we took Morgan to the vet, we decided to try some pain medication for her arthritis. She seemed to respond well to it so we discussed continuing it. Morgan has liver disease and I was concerned how her liver would react to the new meds. Tuesday Rob took Morgan to the clinic for a blood test. Everything was normal, even some liver readings that had been elevated on her last test. She is doing very well and acting like a happy little dog again.

OK, another pet peeve coming up. 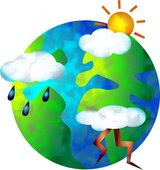 In my next life I'm going to be a weatherman(person). In what other job can you get everything wrong 90% of the time and people still wait for you and listen to your every word? Even when they're right they still cover their asses by using terms such as 'possibility of rain' or 'chance of snow'.

I worked in banking and if I was wrong as often as these guys I would have been fired. They are looked up to.

Over the weekend the weatherman said there would be no chance of rain till Thursday, today. He repeated that several times including early Monday morning. Mid morning on Monday it started raining and I don't mean showers. This was cloudbursts. We had to drive across town and the streets were all flooded because the rain was falling so hard that it had nowhere to go.

It rained all day and when we took the dogs out in the evening they were muddy messes. Rob stood at the back door with the hose and sprayed each of them as they passed him on their way inside. Still they looked more brown than white. 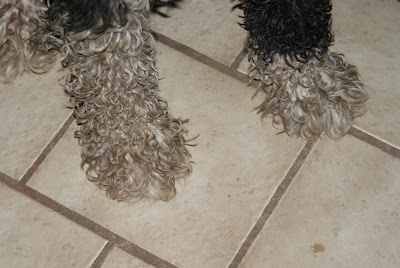 Check out Noah's white legs even after being hosed down. And being dogs, we had to do this all over again a few hours later. Nice going, weatherman!

This isn't a typical Dogs On Thursday post, but I mentioned the dogs, so it counts.
Posted by Sue at 2:16 PM

good, glad you are a lot better than at first seemed...thanks rob for letting us know, good man. i agree with your pet peaves, specially the overdone reporting (e.g. michael jackson's death) and the weather man grrrrrrrrrrrr to all of them. so glad the fence story ended fine too and they got the bad man, yay i like it when a story has a happy ending, and yay for our morgan on his meds...and i love those grubby feet, that about covers it all. my per peave here in london is dog owners who do NOT pick up their doggie litter gggggrrrrrr

I'm sorry to hear about your accident. I hope you fully recover quickly. I hate it when my mom is sick or injured, because it takes away from my play time. I'm glad to hear that the fence got fixed and paid for.

Sorry to hear about your fall, Sue. I hope you recover soon!
Glad to hear Morgan is doing well!
Take care!

Well I'm glad to see you back on the blog! Thought you'd be gone longer than this.

I am one of those people who find myself constantly listening to the weather forecasts, getting ready to help my noise-phobic dog through a supposed storm, only for the sun to come out. Go figure. Looking up at the sky and making an inference is starting to seem like the smarter idea.

Sue, Glad you are up and around, even if it is on 4 'legs'.
Good news about Morgan. That's great that her liver hasn't been affected by the meds. I'm sure she's happy too.
I'm with you about the press. How dumb do they think people are about the healthcare situation?

Glad that you are feeling a bit better! Hopefully the ankle will make a full recovery!

The weathermen drive me nuts as well. I look out of the window and it's storming buckets... meanwhile the weatherman says "There is currently a possibility of thundershowers." Um... possibility REALIZED!

Glad you are doing better. You know, with an iPhone-you can blog from the couch! I also hate how long the weather forecast it-by the time they go through all the stuff no one cares about I've gotten distracted and always miss the actual forecast. I have weather on my iPhone though-so, another problem solved!

Glad to hear that your ankle is improving! Hopefully you will be a hundred percent soon! And um don't get me started on reporters but here is one of my peeves, our local newspaper seems to have quite a number of typos. I mean, don't they have proof readers anymore, can I apply?

Glad Rob told us you were out of commission, and glad you're moving around again. I'm with you on all the peeves. How many news cycles had me bellowing at my TV: "Give it up! Michael Jackson's still dead!"? And I listen to my arthritis for weather forecasts; it's accurate 3/4 of the time! Be careful, and I hope the rain stays away for the weekend. Mud is no fun, especially with crutches.

I'm so glad you're mobile again! (And how do you carry ten dog bowls, much less do so going down stairs?)

At the moment, I have no pet peeves. The girls are at work with me and behaving so nicely...

That's a nasty fall you had ... we hope you're recovering quickly. It's no fun when one's mobility is restricted because of injury ... I didn't need crutches when i was accidently bitten but because bites were on my knee had to hobble about confined to flat spaces - which was tough because Dog WOods grounds is fairly undulating.

We had some rain today. What a relief. Think the weather's going quite mad.

Oh dear, we are sorry to hear about your fall - we can only imagine that you were sleep walking at the time!!!
It sounds like the middle of the night to us.
We are glad your injuries are minor but nonetheless they will be incovenient.
We agree with your views on reporting etc - all sent to try us we believe. We particularly relate to 'soulbrush' re owners not picking up - makes us mad as it give dogs a bad press!
Very good news about Morgan - we are so pleased that she is a happy dog - which in turn makes for a happy you!
We were interested reading your comment that Martha might sit on the bridge cos Bailey never goes there!
Don't think so but you never can tell.
Take it easy and remember to elevate your foot!

Glad you are on the mend... and Yeah for Morgan's blood work!!!

Mom is wincing just reading your post! We hope you're back to 100% soon!
Our weatherman is only half right, if that! UGH!

I'm glad you're doing better. Too bad you can't blame it on the dogs - that's what I would do! LOL!