Come Out, Come Out, Wherever You Are

When we opened the door this morning and the dogs poured thru, Bailey thought she saw something scurry into the wood pile. Last year I saw a little mouse sticking his head out of the sticks on the pile and I'm guessing he lives there, perhaps with his family. 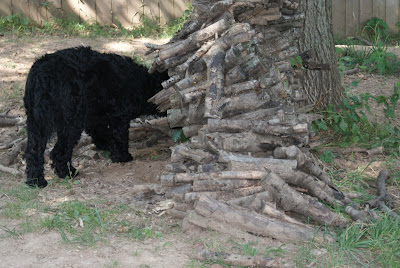 Bailey loves to hunt and spends hours following the tracks of squirrels and rabbits that visit the yard. She becomes so absorbed in the hunt that she doesn't notice what her siblings are doing or even if they've gone inside and left her in the yard alone. 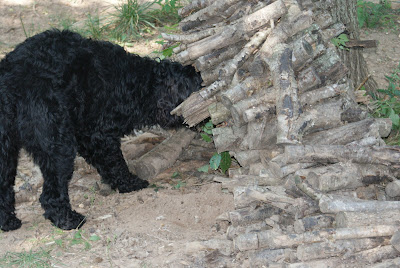 She was trying to poke her head in between the sticks to find her prey. 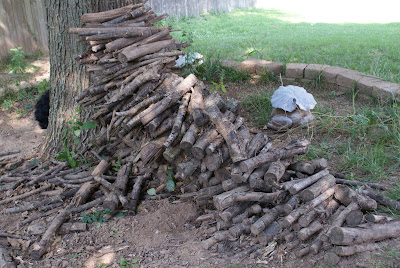 The wood pile has been there since a big ice storm two years ago and has only been partially knocked down once when Tess climbed it to see what was on the top. 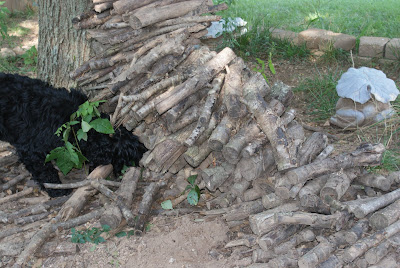 Bailey has knocked down several sticks and the whole pile is leaning now. 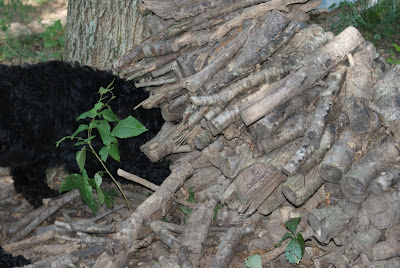 She's reaching her paw in to try to clear a space. She also tried digging a hole under the pile. 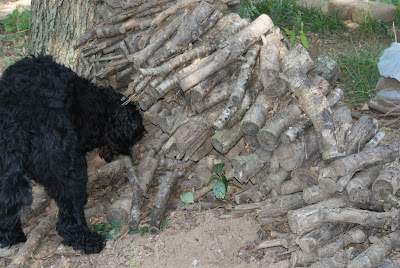 It's very frustrating when a dog can't get in there after that mouse, but she won't give up. 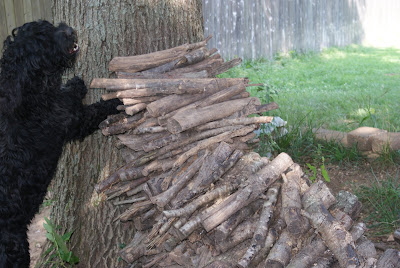 Maybe he went up here. 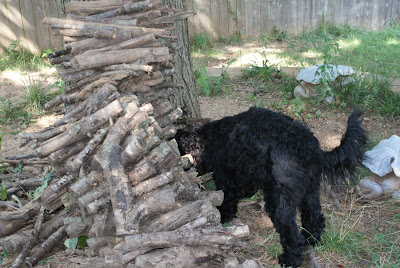 She's checking on the other side to see if there's a better opening. 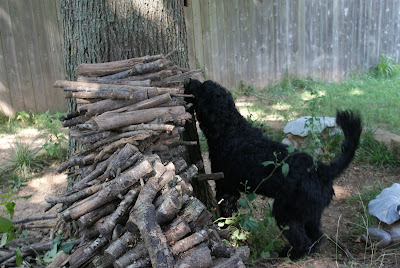 She has to check everywhere. No telling where that sneaky mouse could be. 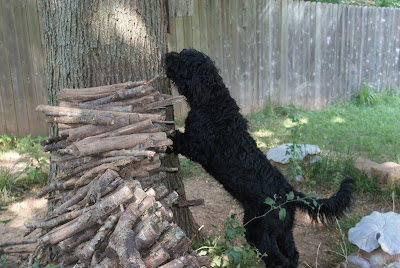 She's very determined and I'm sure in the next few days either she'll find her mouse, or the mouse will move to a safer neighborhood.

Join our toy discussion on Dogs-N-More.
Posted by Sue at 8:44 PM

You gotta give her credit for persistence:)

She sure isn't a quitter. I think Marge would have been fascinated by a mouse in a woodpile, too!

You and I would make an awesome team, Bailey! Can I come over and help you?

That first picture - I thought it was a bear in your woodpile!

We had to get rid of our woodpile (we no longer burn wood) because of the legless THINGS that were calling to Mugsy. I'm glad Bailey has a mouse to entertain her.

Very cute! I ALMOST thought you had a bear in your backyard ... I saw that first pic and the title, lol

Go Bailey - get your mouse! Hope for your Mom's sake that the "safer neighborhood" isn't inside. g

Go Bailey! you just showed me how to go after those annoying little chipmunks that are trying to invade my backyard! try try again! :)

That's some commitment! My ma ape would like to rent your services. Last year we had a mouse in the house (2, it turns out!) and we ignored it even when we saw it ON THE COUNTER.

ps. You may have uncovered irrefutable evidence of Obama's non-citizenship--his foreign dog! Not like that last guy's all-American Scotties. Oh wait...:)

We keep seeing you on other blogs that we visit - in the comments bit!
We thought we would come and say hello.
We have a Bailey too who loves to hunt so a good name choice!
Loved the pics.
love
Martha & Bailey xx

I am with Nichole, I thought it was a bear too! Till I started reading! Amazing how persistent they can be when chasing something. Tonight Maggie was out in the yard and heard something in a tree.... which turned out to be a hawk (saw it fly away) but she thought something was still up the tree. She still hasn't realized she can't climb trees!

What cute pictures! Your little pooch is going to find that little rascal no matter what it takes. Happy DOT!

It was extremely interesting for me to read that article. Thanx for it. I like such topics and anything connected to them. I definitely want to read more on that blog soon.