The Good, The Bad and The Uncooperative

Everyone else has had their snack. I just have the three boys left. Let's do it. 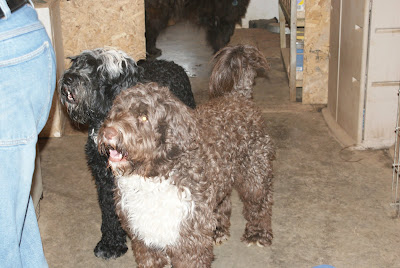 Don't they look like little angels? Huh, you don't know them. Sky is a very good boy. He tries hard to do exactly what I want. Fudge is my bad boy. He'd like to please me, but sometimes it's just more fun to get in trouble and suffer the consequences. Tsar thinks everything is a plot and everyone is trying to trick him into doing something he doesn't want to do. 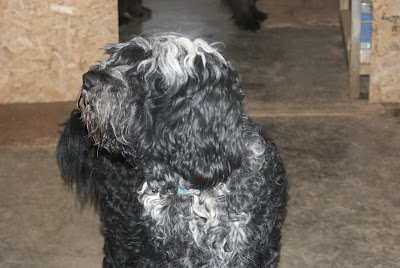 Sky thinks he smells something good to eat. Sky really likes to eat. 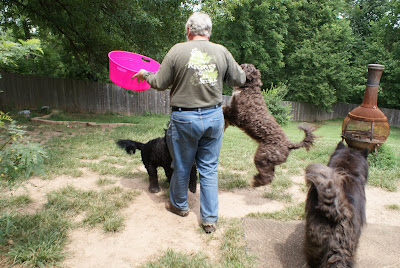 Flying Fudge must be the father of Leaping Lola and Norma Jean the Jumping Bean. 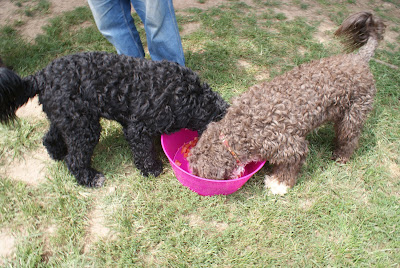 Fudge and Sky don't waste any time getting into the melon. 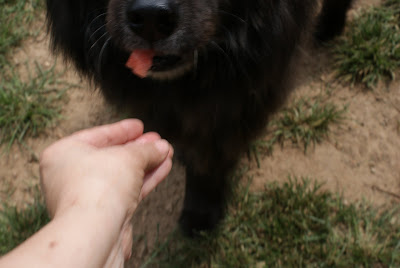 Tsar won't stick his head in the pink tub, so I try hand feeding him. He's not sure about this, even though he liked it the last time. 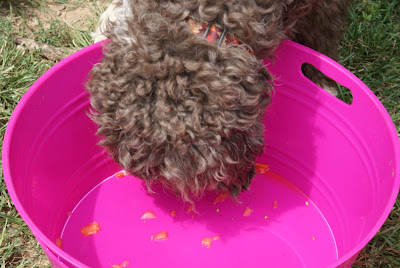 Fudge doesn't have any problem putting his head in the tub. Fudge is also the official yogurt cup licker each night. After everyone has had their share, he licks out the empty containers. 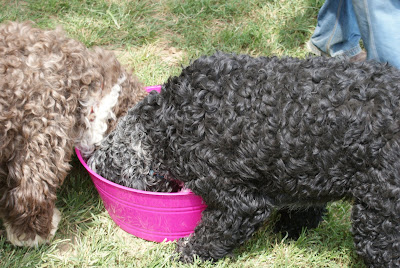 These two boys get along great. Fudge picks on Noah, but not on Sky. Of course the fact that Sky outweighs his father may have something to do with it. 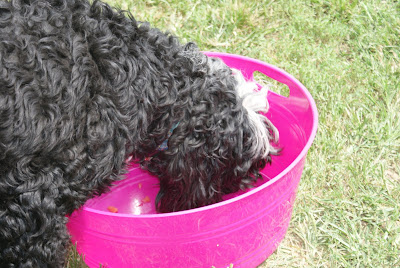 Sky is the clean up pup this time. This big boy can really eat and almost never leaves anything behind.
Posted by Sue at 8:28 PM

I added lettuce to the kibble tonight and the dogs were in heaven. Beau even thought about going over and checking out Lucy's bowl. He's a stupid boy because lucy would eat him alive - seriously.

I just love Fudge. He's such a good jumper. g

God your doggies are just all so cute - I could look at their pictures all day!

I don't think I've ever been so aware of HOW much bigger the son is than his father!!

Poor Tsar. Gretchen is like that... just because she ate it last time doesn't mean she cares for it this time.

Recently I cleaned out a cantalope and tried to leave the outsides in my flower bed for organic composting. Hah! As soon as I went in the house Maggie had gone over and took a piece, and was cleaning the melon I didn't get off the skin. Next time I went into the yard and looked in the flower bed there were no skins left at all!! Can't believe she probably ate them all, unless she decided to bury some!! Dogs!

They look so content and I have to tell you I just love the names! I still can't get over how they eat so much watermelon!

They are just so beautiful!

We're so glad you guys are enjoying the watermelon! We had cantaloupe today and that's pretty good too!

Sue - a regular sewing machine will go through nylon webbing for leashes.... at least my old clunker and my new new whiz machine both will... thanks for stopping by!

I can only imagine how busy you are at meal times LOL!

It's interesting how all the distinct personalities interact. I'm a very slow eater and I'm not interested in food half the time. Tagpi on the other hand lives and breathes for food. I always live a bit of food at the bottom of my bowl and Tagpi acts as the cleanup crew. My mom is a bit grateful, because now that Tagpi is around licking bowls clean, she doesn't have to scrub at old crusty food when she cleans our bowls.

Hahaha....Flying Fugde, I love it! Oh, we've missed you guys so much, it's lovely to be visiting again *big grins* we'll hopefully pick up DOT again soon too, just need to catch our breath first!
Tsar sounds like Snoop the Suspicious....and ours have to get a yoghurt pot each to lick at teatime or an apple core, whatever we had for pudding.
See you again soon, have a great weekend!
Slobbers xx

Great shots - as always with your gang!