I've become aware of how most of my dogs manage to grow into their names. Coming up with names for the whole litter was a challenge that I took very seriously. On the blog of our Siberian friends Phantom and Thunder they played the name game and I decided to do the same. It's easy to play along. Tell how you came up with the name of your pet and give any nicknames you call him or her. 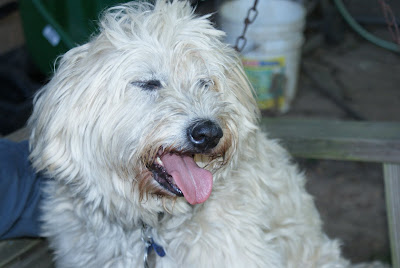 When Morgan came to live with us, she had no socialization with people. She had grown up with her litter mates in an outside doghouse and only saw people when they threw down some food for the pups. She didn't like us very well. She was sort of mysterious and looked owlish with a dark mask on her face. I had a very hard time coming up with an appropriate name for her.

At lunch one day Rob and I were making lists of possible names when Rob mentioned that she had a witchy quality and suggested Hazel. I didn't like that but then I thought of Morgan La Fey, the sorceress from the legend of King Arthur. It seemed to fit. We started calling her Morgan. As time went on her occasional clownishness caused us to call her Magoo.

Soon she was Morgan Magoo. The two seem so opposite of each other and yet feel right for this sweet little girl who surprises us over and over again with her strength and determination.

Her nicknames are Magoo and Missy Morgan. 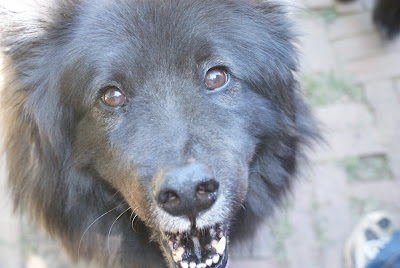 Tsar was originally going to be Gustav, but that just didn't fit at all. This big boy has always had an aloof, above it all attitude. He will only be handled when he chooses and doesn't believe that commands apply to him. He quickly became Tsar because of his Siberian ancestry. He has definitely lived up to his name. Tsar lives life on his own terms.

His only nickname is Tsar Boy. 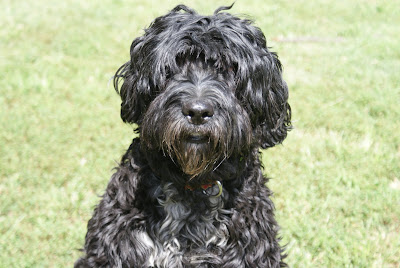 I spent hours pouring over records of Portuguese Water Dogs trying to find a name for Samba. I knew I would pay tribute to my first PWD, Bentley (Boo), but I needed something that would showcase her energy and enthusiasm for life. When I met her for the first time in the airport in Kansas City, there was no doubt left. After an eight hour flight in a small carrier, she exploded out the door into my arms and was ready to run and play and dance. 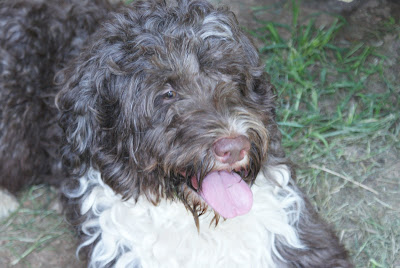 With Fudge there was a matter of space. His name had to include his breeder's kennel name, Deerpark and my kennel name Legacy. The AKC at that time only allowed 26 letters in a name so I had to find something short that fit between the two. The fact that he was brown while my other two PWDs were black solved part of the problem. Chocolate fit nicely. He became Deerpark's Chocolate Legacy.

Now, what to call him? I thought of Cocoa, Hershey, Kahlua, Snickers and many others, but none were right for him. Rob asked me what my favorite chocolate was and I immediately answered fudge. That was it. We had our own living, breathing, jumping Fudge.

Then the pups were born and I had to come up with eight names. I wanted them to have some connection to Portugal or to water and I succeeded in some cases. Others just named themselves. 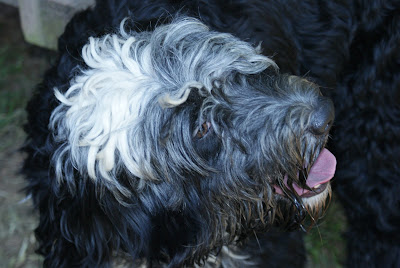 Tess was the firstborn. Her name is Legacy's Let Me Count The Ways. It's a line from Sonnets From The Portuguese by Elizabeth Barrett Browning. She has grown into her name.

I think of the name Tess as a delicate creature and even though my Tess is a big strong dog, she seems fragile. She tends to be shy and needs lots of encouragement. She is somewhat silly and scatter-brained. She also has deformities in her legs that cause her to have a comical gait when she walks. She is very sweet and thrives on attention and petting.

Her nicknames are Tessie, Tessa and Tessie Lou. 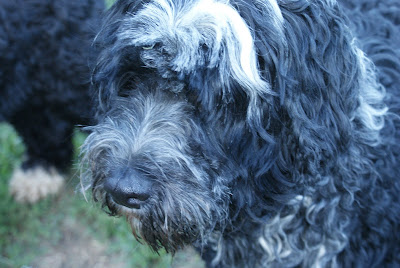 My grandmother had a lot of little sayings and poems. One was Red sky at night, sailors delight.
Red sky in the morning, sailors take warning. What could be more perfect for a water dog than a name about the sea and sailors. Puppy #2 became Legacy's Red Sky At Night. We called him Sky.
He has become the largest of our dogs, even outweighing Tsar. He's calm and steady and a wonderful family pet. What better traits for a sailor?

His nicknames include Skyber, Sky Boy and Big Foot. 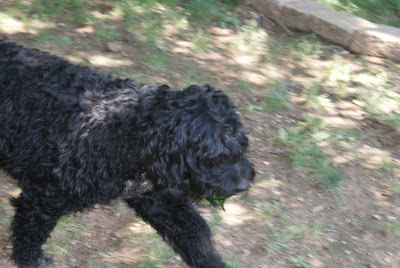 Lola didn't get a Portuguese or a water name. She got a name right out of a Broadway play, Damn Yankees. Her name is Legacy's Whatever Lola Wants. Here are the lyrics.

Whatever Lola wants
Lola gets,
And little man, little Lola wants you.
Make up your mind to have no regrets
Recline yourself, resign yourself, you're through.
I always get what I aim for
And your heart and soul is what I came for.

Whatever Lola wants
Lola gets,
Take off your coat
Don't you know you can't win?
You're no exception to the rule,
I'm irresistible, you fool, give in!

Rob immediately fell under her spell. From the time she was born he would hold her and tell me she was the most beautiful puppy ever born. I guess she was well named.

She is almost always called Lola, although I once in a while call her Curly Girlie. 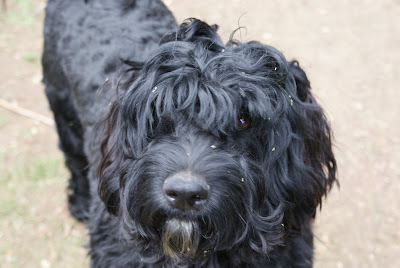 Bailey became my immediate favorite when she was born. She was almost completely black like her mother and my first PWD. Ebony came to mind at once and Rob suggested Bay to go with it and get back to our water theme. She is Legacy's Ebony Bay. Bailey is our adventurer. She was trying to climb out of the whelping box before her eyes were open and succeeded as soon as they did open. She climbed out of any pen we put her in and can climb a ladder with no trouble. She hunts and follows trails and digs not holes, but trenches in the yard. 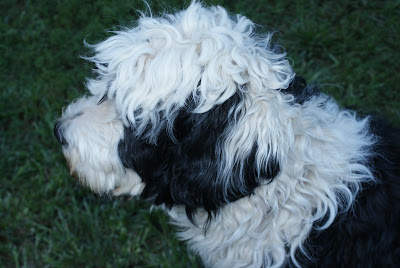 Noah isn't the youngest but he's the smallest. He was much smaller than any of the other puppies and still seems more puppyish. He likes to cuddle and he's just so darn cute. He was meant to go live with my best friend, though that didn't work out and I'm glad he's still here. My friend collects Noah's Ark stuff. She has all sorts of Noah's ark things around her home and I've helped her gather her collection over the years.

Shortly before the pups were born she sent me a children's book she had found called Blue and Green Ark by Brian Patten. It's about saving the earth (the blue and green ark adrift in the dark) and the illustrations are beautiful. I chose to name this boy Legacy's Adrift In The Dark and call him Noah. My friend was thrilled with the choice. 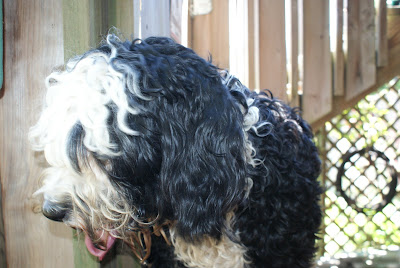 Last but by no means least is Norma Jean. From the time I was three years old and saw one on the street, I wanted an Afghan Hound. I was going to name her Norma Jean in honor of Marilyn Monroe. I never got my Afghan.

When my pups were born, the last one, the big one with the huge white face was a standout. She wanted to be with me constantly and still does. She was dramatic to look at and in her actions, a real actress. I couldn't come up with a name for her. Finally Rob suggested I give her the name I'd been saving for years and I suddenly realized that it fit her perfectly. She even has a little black spot on her face, just like MM. She was Norma Jean.

What about a registered name? Rob solved that one, too. What's everyone's favorite MM movie? She became Legacy's Some Like It Hot. This dog certainly named herself and has lived up to her name. She's bigger than life, funny, sweet and silly.

Her nicknames include NJ, Jumping Bean and Beauty Queen. I don't have to call her at all. If she sees me, she runs to my side and doesn't leave. I also call her My Girl.

My dogs have grown into their names and I'm pleased with all of them. Naming someone is a big responsibility and I think we did pretty well.
Posted by Sue at 10:08 AM

I love it!!! I laughed through the whole post. I had mistakenly assumed Tess was named for one of my favorite books (I've pondered the name for my own dogs!). I'll have to join in very soon.

Very cool, I love the thought you've put into your names. It was a struggle naming Addie as well, and I think it fits her and she's grown into it too. Funny how that happens, huh? I did this once with her back in my old posts.

What an interesting post! I'm trying to come up with a full name for Marge so I can register her for agility trials.

Excellent post! I enjoyed a lot to know those stories about your names. Those names and nicknames are so cute! Thanks for sharing with us. Great pictures!

We enjoyed your post - we feel we are got to know more about the individual personalities through the names and nicknames you chose.
We kept Martha & Bailey's names as it was the only thing they had - not even a collar!
We have developed nicknames though without even planning too.

I love to hear about how dogs get their names. Great post, Sue....tomorrow, I'll actually post to my blog....don't faint! and I'll tell you how Sunny got her name.

Great post - loved the story behind each of the pups' names.

You have done well - and how great to get an understanding of name origins. I'd love to say I was that thoughtful with ours. ;)

Sue, I enjoyed hearing so much how you came up with all of the names for your dogs. Unfortunately we didn't name Charli but when I look at here I couldn't think of a better name.

What a lot of thought you put into naming them - I love Norma Jean and Fudge is just too funny - we have a dufus boy too. g

What a great post! We loved the stories behind all of your names and we love all of the pictures!

I absolutely love reading through how your dogs got their names! They definitely grew into their names ... like ours did too!

What wonderful names and explanations!!! We loved this post and think we will do it ourselves.

PS - from Mom, I've been contemplating for several months what I will name my next little Scottie girl. I hope Lilly gives her to me in December.

Love your descriptions. What neat names for each of your loves. Mine also have several nick-names for all their different times/moods.