A couple years ago, in the spring, I noticed the telltale signs of a mouse in the garage. When we first moved here we fought a battle with mice getting into the pantry, so I didn't want to go thru that again. We also keep the dog food in the garage and I didn't want little visitors helping themselves, so I reported the findings to Rob and he set up a trap.

We use the 'mice cube' traps. They're little plastic boxes with a swinging door. The door only swings one direction, so once the mouse runs inside, he can't get out again. They have worked well for us in the past. They don't hurt the mouse and we don't have to handle the little creature. 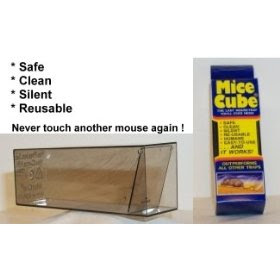 Rob baited the trap with a piece of dog biscuit which seemed to be the main attraction and we left it on the counter top in the garage. The next morning when I took the dogs out I glanced at the trap and there was a mouse in it.

He was a very tiny little mouse and was sitting in the trap munching on the dog biscuit. Once I got the dogs back inside, I carried the trap containing the mouse to the rock pile in the yard, tipped it over and dumped the little mouse out onto a rock. 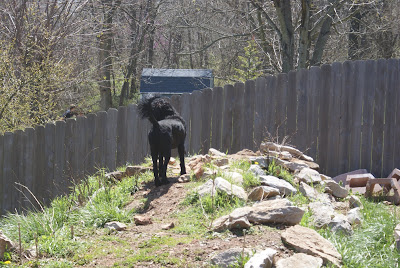 He just sat there and looked at me so I clapped my hands and he went down between a couple rocks. I figured he'd find a nice place to live and that was that. I went back in the garage and rebaited the trap, because I know when there's a little mouse like that, there are probably a bunch of brothers and sisters.

The next morning on the way out I noticed there was a mouse in the trap. Again I finished with the dogs and took the trap to the rock pile and dumped it. This time the mouse ran into the rocks with no coaxing. I went in, stuck another piece of dog biscuit in the trap and forgot about it.

When Rob got home from work that night he told me there had been a mouse in the trap and he had dumped it. Wow, three mice in two days. The trap was working great. 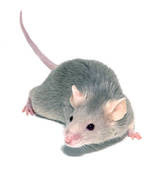 The next morning, another mouse. That night, another mouse. Rob suggested that maybe it was the same mouse. I laughed and said no, we were clearing out the entire family.

The next morning, another mouse. That night, another mouse. Now I was beginning to wonder if it could be the same mouse. I decided to take it farther from the house to dump the trap. I walked around the fence into the woods and dumped the mouse out. He sat there and looked at me. It was a little unnerving. Eventually he turned and ran away. 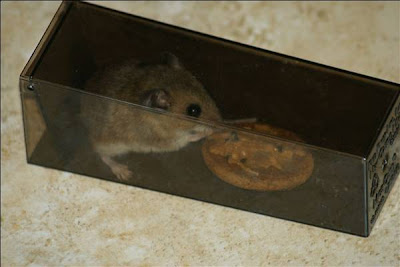 The next morning, another mouse, that evening when Rob got home we dumped the mouse that was waiting in the trap and again discussed whether it could be the same mouse. We sat on the swing in the back yard and I suggested maybe we should mark it somehow. I didn't really want to handle the mouse so I didn't mark it, but I did notice that it was growing. He was now almost fully grown.

When we walked back into the garage the mouse was in the trap. He had beaten us into the house. Now the mouse chase accelerated. I checked the trap about every two to three hours and most of the time the mouse was there munching his biscuit.

The twenty third time I found the mouse in the trap I told Rob I thought we might have a serious rodent problem. Rob laughed and said he was sure it was the same mouse each time. I was worried about being overrun by mice and Rob thought the situation was funny. 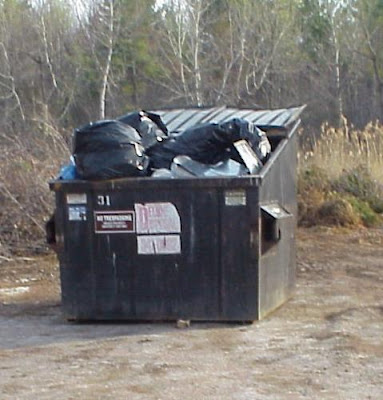 The next morning when we got up and went into the garage the mouse was there waiting for us. We put the trap containing the mouse in the car and drove about five miles away. We found an area that had a number of dumpsters from restaurants that would provide good dining for our mouse.

We took the trap to an area with a tree and high grass and some rocks to hide in and dumped him out. He sat on a rock and looked at us. I actually felt as if I was abandoning him. After a couple minutes he scurried off to his new home.

When we got home we baited the trap and put it on the counter, but it sat empty until we finally put it away. It had been one mouse that liked living with us. He had his own little plastic room with a view and a steady diet of dog biscuits. A couple times a day we took him outside for exercise and then he came home again. When we drive past the area we left him we always say "Hi mouse".
Posted by Sue at 1:33 PM

That's a cute story! I hope Mouse is happy in the new digs.

A very cute story. So many people poison mice and use inhumane traps, without realizing that they're just little creatures looking for a place to live.

I hope you enjoyed the Fort Wadsworth stuff I sent. Sorry I couldn't find out more about the Wadsworths themselves.

How cute. so nice of you to feed the little mouse for a week or more. You are kind :-}

i just lovethis story, what a sweet little mouse (not), my son has just had a problem with rats -and not just one...yuk!!

too funny. what a nice little humane trap-I have not seen those before.

Great story, made Mom laugh. Thanks for sharing.

What a great story. Rob and I had a good giggle over it.

what a cute story! my mom laughed when she realized you had done that over twenty times! BOL! You have the patience of the saint and the little mouse is probably now dining on some delicious burgers!

That is a lovely story. I can't kill mice, or even rats, though I did have to kill one with a trap a couple of years ago and it made me sad to see the little hands curled up in agony.

Oh I did enjoy reading your post, really nice of you to find him a new home, the little critter I wonder if he knows how lucky he is. best wishes Julie.C

LMAO... as I started reading I was thinking "doesn't she know she has to take the mouse and let him loose AWAY from the house.. a couple miles if possible"... lol. We use the same traps.

When you got to the third mouse catching, I thought it might be just one who had found a nice buffet. I just can't stand mice anywhere near me. Glad you were kindly enough to help mouse relocate to a new town. I hope he appreciates the job transfer.

one of these days we will tell you about the time that Brody killed a rat (and brought it in the house).

we don't want a mouse for a pet, but it's a really cute story. that mouse was pretty smart.

What a cute story! That mousie sure did eat good while he was at your house!

*chuckles* Mouse learnt that being trapped isn't so bad after all - a cookie, a nice clean room ... what more could a mouse want?

We hope mouse is happy with new home. Though it won't be quite as clean as before!