The Toy Did It

When we were first married we had a part Lab pup named Pylon who was a terror. She ate half our furniture, stripped the wallpaper off the kitchen wall, regularly raided Rob's gym bag to eat goggles and soap and loved to eat the insides out of shoes and gloves.

Pylon was very difficult to housebreak. She would hide her accidents in dark corners or behind furniture. Rob was very adept at finding these little offerings with his bare feet, which he didn't really enjoy and the more he yelled, the better Py became at hiding her poops.

One morning as I was coming down the stairs to fix breakfast, I passed Py's toy frog on the stairs. I walked by it, then stopped and went back for a second look. Something didn't seem right. I started laughing and called Rob to come take a look. Py had pooped on the stairs and set her toy frog on top of the pile of poop. How could we yell at her when obviously the frog had done it. She got away with that one. 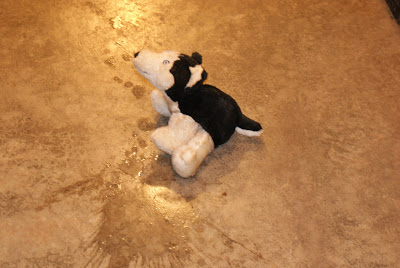 This morning as I was walking thru the garage I noticed that this doggy toy was sitting in a puddle and had obviously had an accident. Since there were no dogs around I didn't know who was at fault, I just laughed and removed the toy. As it turned out Rob was present when this incident took place and the puddle is just water spilled from the drinking bucket, not what it appears to be. One of the dogs did place the toy there, so who says these dogs don't have a sense of humor? 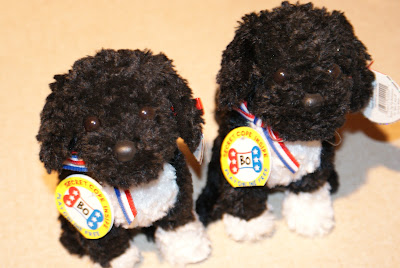 Speaking of toys, aren't these cute? They're the Beanie version of BoObama. I think however, they look just like Gracie, our pup that went to live with J and Splash. We saw these the other day when we were out and about and Rob bought one for me and one for J. 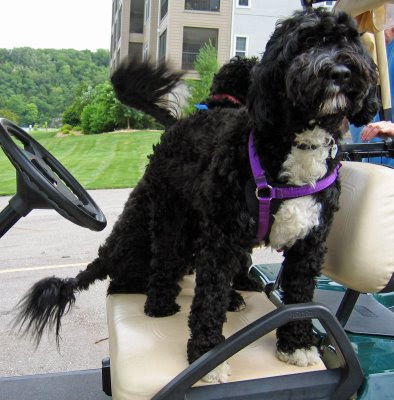 This is the real Gracie. Notice a resemblance to a famous political dog?

As long as I'm on the topic of politics, even though I try to stay clear of politics on this blog, I must mention the death of Ted Kennedy. No matter where you land on the political spectrum or how you feel about the Kennedys, you must admit that Ted Kennedy loved his dogs. 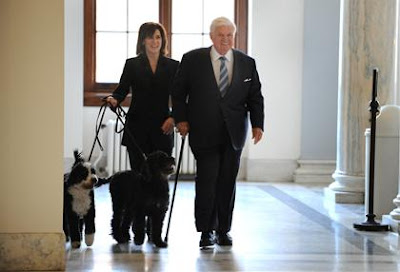 He took them to work with him most days and was often seen on the mall throwing tennis balls for them to chase. He took them sailing and walking on the beach. Believe me, that is a great life for a PWD. 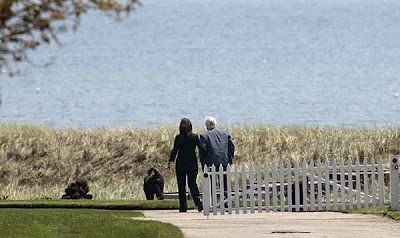 Senator and Mrs. Kennedy were fellow members of the Portuguese Water Dog Club of America and they did much to promote this special breed that I love so much. We in the PWD community will miss Ted for the loving attention he brought to our breed. 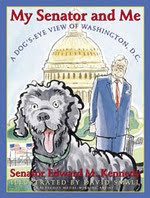 A couple years ago Senator Kennedy wrote a book from his dog Splash's point of view. Shortly after it's publication, my Samba began an e-mail correspondence with Splash and I will treasure those emails. 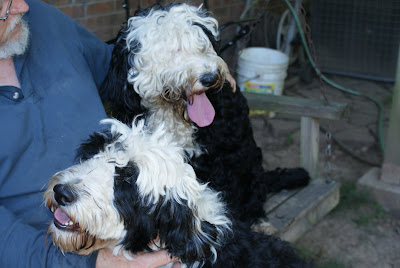 Don't these two look a lot alike? These are Norma Jean and Noah. One postscript to yesterday's blog about names. I like the name Noah, but if you plan to name your dog that, be aware that there is a problem.

When young creatures, human or canine begin to learn the language and how to live with others, one of the first words they must learn is the word 'no'. Without this word there could be all sorts of problems. If a dog or for that matter a child is named Noah, you find yourself saying "No, no, Noah" rather frequently. I discovered that my puppy just thought I spoke with a stutter and had a harder time than his siblings learning the meaning of the word no. It's just something to think about. 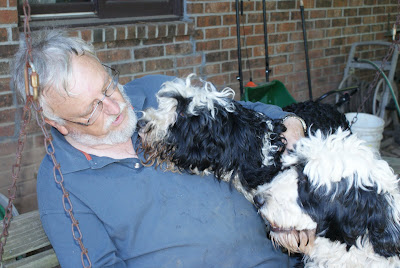 Norma Jean loves to give big wet sloppy kisses.
Posted by Sue at 9:43 AM

Wonderful memories, as well as pics, and good point on the "Noah". My neice just named her little boy that, hmmmm, wonder if she thought of that!

That picture is priceless! If it weren't water, I could picture all of your PWDs getting together and plotting about how to frame the stuffie as the guilty one.

I'm not a political person, and I didn't know that about Ted Kennedy. Sounds like he was a great ambassador for your breed.

I have always thought Bo looks like a black Fudge. Aren't they related?

I think I must put BoObama on my birthday wish list... too cute!
RIP Teddy ... he did love his dogs, indeed!

great stories. thanks for sharing!

Dogs do have a sense of humor. Thor teases people with his duck to get them to play, then leads them to where he wants to go!

no no noah, i didnt thi nk of that..tee hee.

That is a great story about Pylon, and oh what memories it must bring back. Yes, Teddy has his shortcomings and not all agree with his politics, but he was a dog lover.

What a great post! Dogs are so smart aren't they? People who don't have them don't realize this. I thought it was great how Ted Kennedy took such good care of his dogs. I didn't know he took them to work with him all of the time. How neat.

So, do you know who was actually writing for Splash? Great story about Pylon. What a silly girl - and there are some people who think dogs are stupid.

I agree with Chan - I think Bo takes after Fudge. They're both such handsome boys. g

Wonderful pics. And thanks for the insight into Ted Kennedy's dog life - we were not aware of that.

Just this morning our Mom was saying that since the President had a Portuguese Water Dog that she suspected we'd start seeing more toys and collectibles.

The senator loved his dogs and the breed a lot. May he rest in peace.