My PWDs each have very different personalities.

Fudge can be goofy, stubborn and silly. He can be obedient if he wants to be or he can act up. He can be a bully or extremely sweet. Lately he has decided that he's my guardian. He parks himself in front of my chair in the evening and if the other dogs get too close to me, he'll climb into my lap. That might look like I'm protecting him, but in his little doggy mind, I believe he thinks he's blocking me from danger. 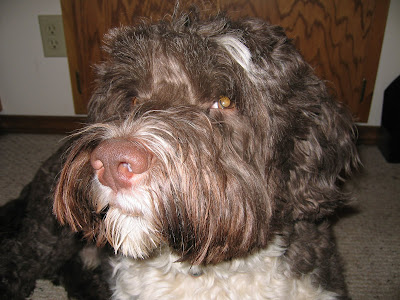 Fudge seems to really enjoy our obedience work together. He holds himself proudly, head high and he pays attention to what I tell him. Our competition experience was a little frustrating, but having lived with this breed for so long I shouldn't have been surprised. They get bored easily and during training we have to vary our routines or they either start creating their own routine or they just shut down completely. Fudge did well the first two days of the competition but on the third day we were doing the same moves, so he decided to show the judge that he could do other things, too. He did his jumps and roll overs and spins. I'm sure he thought he was doing a great job. The judge didn't agree.

Fudge stays near me at all times. He follows me from room to room and will settle down where he can keep an eye on me. In the morning he greets me with a 'woo-woo' noise and usually brings me a toy. At bedtime he gets up on the bed at my feet for a few minutes before going to sleep. If I wake up during the night, he's usually asleep on the floor beside the bed and I have to step over him. He's very loyal. He also still acts very much like a puppy and gets into trouble often. 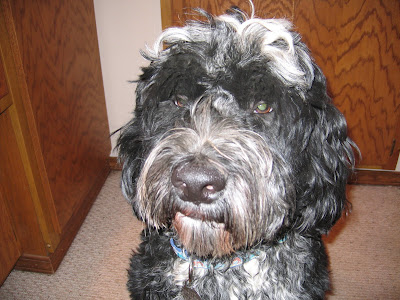 Sky, who is Fudge's son, is totally different in personality. He's calm and except for his backyard barking, he's quiet. In the backyard he barks even though there's nothing to bark at. He just stands in the center of the yard barking, announcing to the world that he's arrived.

Sky is larger than the standard in height and weight, but is an impressive looking dog with his black and silver coloring. He's enthusiastic about doing things with us, loves to retrieve and usually has his ball somewhere close by. He's a bit lazy and doesn't run as much as the others unless we throw the ball for him. When walking he sort of lumbers, not a great gait, and doesn't always carry his head high.

He's more independent than Fudge and will go to his favorite spot, the window seat in the living room, and stretch out to nap. He comes when called and knows several commands, but isn't as fond of working as Fudge. He loves to ride and is one of our best passengers in the car, looking out the window for a while then going to sleep. He is friendlier with strangers than Fudge, who needs time to get to know people.

Sky doesn't counter-surf or steal. He does spin a little when he's excited, but in general he's a well behaved fellow. 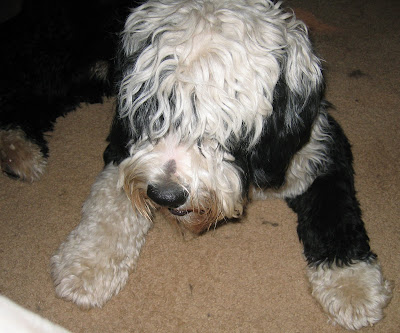 Noah is a teddy bear. He loves people and loves attention. He'll happily climb into a lap for a good cuddle. He's quieter than Sky and more active. He isn't quite as pushy as Fudge but they're a lot alike. Noah loves to do his obedience work with me. If I give a command to Sky, Noah beats him to it. He enjoys going for walks and riding in the car.

Noah gets on the furniture, which Sky has never done. He also counter-surfs and steals. In other words, he's a typical PWD. Noah is small, shorter and lighter than any of the others which gives him even more of a puppy appeal.

Because Fudge has claimed me as his property, Noah has decided to claim Rob and sits next to him in the evening. One nice aspect of that is he wakes Rob up instead of me if he needs anything. 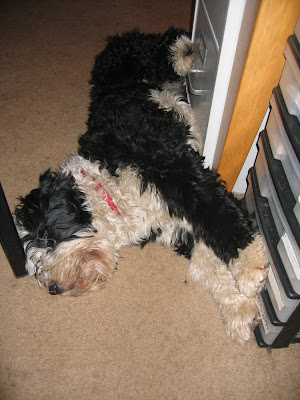 The boys all get along to a degree. They enjoy playing tug with a toy and racing each other around the yard. There is a little friction between Fudge and Noah at times. They are both intact and the sexual tension can cause some posturing and growling. I try to stop it and Noah has been avoiding those situations where Fudge tries to assert his authority. 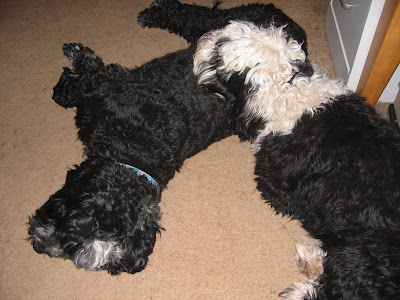 Sky is the peaceful one who gets along with each of the others. He and Noah are best buddies and sometimes sleep together. Sky and Fudge also get along well and will share a toy. There are no major problems and they're a lot of fun to live with.
Posted by Sue at 10:14 AM

Thank you for more insight into your boys. I can see why you delight in this breed, and if not for the Knight's issues with anything other than a short, smooth coat...

Thank you - I feel like I know your boys. I love the photo of the one sleeping next to the file cabinet. Good fun :) g

How well you know your dogs, and how varied are their personalities. It makes me hope even more that the Obama girls don't get a PWD for their first dog. I am pretty sure your days are full from morning to night, but oh so rewarding.
x

i have been so busy with new baby maggie this week, i didn't get to post for dot. your guys are all special each and every one of them.

"He just stands in the center of the yard barking, announcing to the world that he's arrived."

Haha! Galaxy and him would get along, except Galaxy barks A LOT more than that, and inside also ;)