Do I Smell Bacon?

Morgan is obsessive compulsive. There are many ways this manifests itself and over the years we've learned to deal with most of them. My living room windows are covered with dog spit from her licking them and currently we can barely see through them. I need to get out the vinegar and a scrunge to scrape them off. Of course as soon as I do she'll be right behind me licking them again.

We are forever telling her not to lick the eyes and ears of the other dogs. They don't seem to mind, but she'll continue to lick until she makes them sore.

When she gets a new toy, she becomes obsessed with destroying it. She can't rest until it's a pile of torn fabric, cotton stuffing and a chewed up squeaker.

Well, we have a new obsession. Bacon. During the summer when Rob was home in the mornings, we usually went out to breakfast. Morgan always went with us and waited patiently in the car while we went into the restaurant and enjoyed a leisurely meal. When we came out we always carried a little white box that contained several bite sized pieces of bacon. 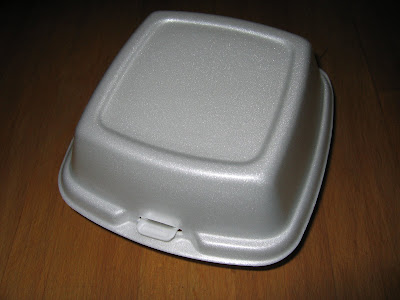 Morgan would eat the bacon in the back seat, then she would lie down and sleep as we drove home.

We've been eating breakfast at home since the beginning of the year and it almost never includes bacon.

For the last two days Morgan has been very agitated in the morning. While we're in the kitchen making coffee, she stands at the foot of the stairs and scratches on the door going into the garage. She whines and moans and won't stop. When we finish breakfast she remains upset and starts turning over waste baskets and pulling things off shelves. Yesterday I leashed her and kept her beside me until she finally settled down and fell asleep.

This morning I got up with the dogs at 6:30. I fed them and let them run around for awhile, then I went back to bed. Rob was up and started the coffee. At 7:30 he came into the bedroom and asked me to get up and make some bacon. While I made the bacon, he took the dogs out again. When the bacon was ready, I broke it into bite sized pieces and put it in a white take out box.

Rob brought in the other dogs, but put Morgan in the car. We drove to a nearby cemetery and parked the car. We walked Morgan for a few minutes, then put her in the back seat and I opened the box and fed her the bacon. She was one happy dog. When the bacon was gone she settled down on her blanket for the ride home.

Well, we found the problem behind her behavior. She thinks she's supposed to go out for breakfast every morning. Now the question is how do we break this pattern.
Posted by Sue at 8:36 PM

Can you just take her to garage and give her the bacon? You could cook a pound or two ahead of time and just heat up some for her, take her outside and give her bacon all by herself.

Abby will obsessively like the beds. To the point they are wet in the morning. When we are in the room with her, we can get her to stop, but over night . . . .

and Lucy eats hard plastic things when nobody is home - like remote controls. g

Oh my goodness you sure do have your hands full, you must fall into bed at the end of the day. I think taking care of all your wonderful doggies must be like taking care of a bunch of really, really smart two year olds.

I confess to chuckling. No, it wouldn't be funny if Morgan was my dog, but you tell a great tale, and it's nice that your pack continues to provide blogging fodder.

Shadow - Pop's sheltie, now Dae's - is obsessive about GOING. He will refuse to come inside, and Dae gives in and just rides him up the drive and back. Sometimes, it's just easier to humor them, but I don't know how placating I'd be about going out to breakfast ALL the time...

Maybe you can feed her from her white box in the car for a week, then in the house for a week and then gradually wean down the amount of bacon.

I think you are just going to have to go out to breakfast every day...problem solved! :)