When our pups were little, Rob made them some puppy sized agility equipment. He built a wooden stand with a ramp. The first time they tried it, they were about 4 weeks old, they kept sliding down the ramp. When they finally made it to the stand, they would walk right off the end. We have some videos of those days and we laugh a lot when we watch them. By the end of the second day they were all able to climb the ramp and didn't fall off the stand unless pushed by the next one coming along. 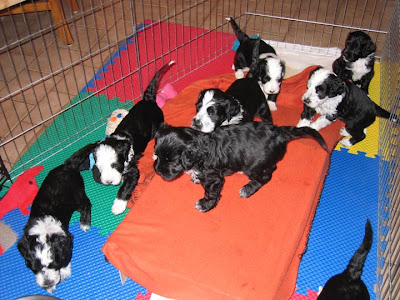 Once they were old enough to play outside Rob built them a teeter totter. He made both the ramp-stand and teeter without using any hardware that could hurt them even if chewed. The pups were interested in the teeter right away, but it took several attempts before they learned how to balance as it moved. 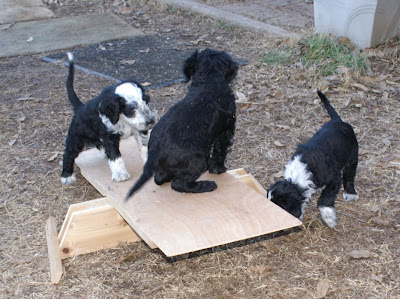 Sky was our teeter champ. He quickly learned how to walk to the center and balance there. Sometimes he would just sit in the center and watch the activity around him. 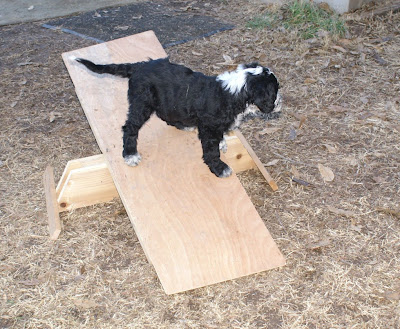 For Christmas the year they were one, I bought several pieces of agility equipment for them. We have a couple jumps, a tunnel and chute and weave poles. Our back yard is such a steep slope that it's hard to find a place to put the equipment, but the girls have played with the tunnel a couple times.

I don't really have a strong interest in doing agility with them on a competition level, we just play with it. I think we'll stick to obedience. 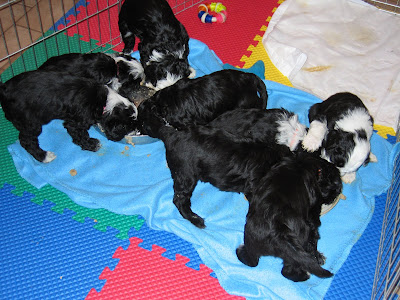 These were their best activities when they were little and still are today. They all are good eaters and great sleepers. 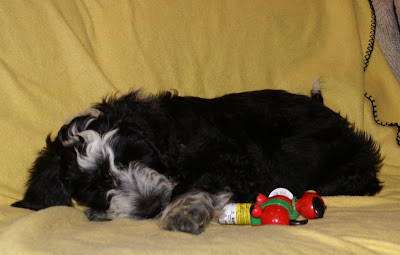 And they are all still utterly adorable ....

They are so freakin' sweet. I don't know how you get anything done. I would just sit around being snuggled. g

Oh man, BABY pics! I have a huge weak spot for Portes, and you're not helping one bit! I agree with Gaylen, I'd just lay in the puppy pile, and have my nose chewed on!

I love the starter agility set! This spring/summer I hope to have my Hubby build me a few small-scale agility pieces, so we can start playing at home. The benefits of living with handymen!

Hopefully he can find time for it between grad school, and his internship! (I'll be bored this summer, since he'll be away most that time!)

THose are the cutest pics!