How Much Is That Doggy In The Window?

'Designer Dogs' are hot right now. They are selling for big bucks. There are a few things people need to realize about these celebrity pooches. First of all they are mutts, mixed breeds no different from 90% of the dogs to be found abandoned in shelters across the country. Because of the fad and the money involved some people find it tempting to breed the family Lab with the Poodle across the street, wait two months for the pups to be born, feed and clean up after them for six to eight weeks, then sell them for whatever the market will bear. 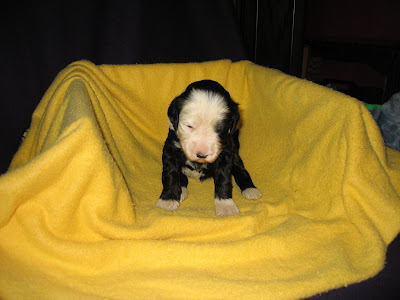 The buyers are getting an adorable, warm, wiggly puppy, but they may be getting a lot more than they expect. All dog breeds have certain health problems that are genetic in nature. Contrary to popular opinion, mixed breeds are not healthier than purebreds. They could be if the proper health screenings were done on the potential parents and breeding was done accordingly, but in the rush to cash in, these are often overlooked. The results can be disastrous to the dog and the family that loves it.

Often buyers are told that the puppy is registered. There are many phony registries that will register any dog for a fee. When the new owner wants to participate in competitive activities with their dog, they learn that their dog is not registrable in the AKC or UKC, the two national registries that conduct dog shows and trials. Their dog is not purebred and therefore not qualified to participate. 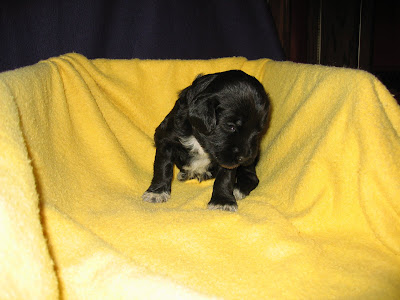 Breeding dogs should not be a money making scheme. Generally if all the bases are covered, the breeder loses money.

Portuguese Water Dogs, just like all other breeds, have certain health conditions that are common to the breed. Gangliosidosis (GM-1) is a wasting disease in puppies. It kills young pups. Progressive Retinal Atrophy(PRA) causes blindness, Hip Dysplasia causes lameness and arthritic conditions, Juvenile Dilated Cardiomyopathy is a heart condition that kills young dogs, usually by two years of age. Hemangiosarcoma is a fatal form of cancer and Addisons Disease is a liver disease.

Through the hard work of PWD breeders, support by The Portuguese Water Dog Club of America and The PWD Foundation, ongoing research is being done on all these conditions and several have had major break-throughs. 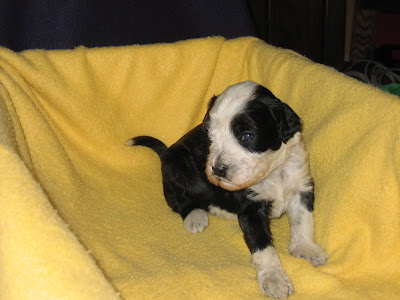 Before even thinking about breeding, Samba had genetic tests done for GM-1 and PRA. Her eyes were examined by a canine opthalmologist. Her hips were x-rayed and evaluated by the Orthopedic Foundation for Animals. She was examined by a canine cardiologist and her DNA profile was done through the AKC.

When Fudge joined the family, the same screenings were performed on him. Although Samba is a PRA carrier, we were able to breed the two because Fudge is clear. Therefore, although some of the pups could be carriers, none will be affected by PRA and lose their sight. Both dogs are clear of GM-1 and their hips passed. 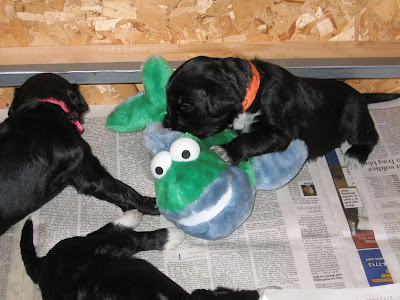 Even before the pups arrived there were expenses involved. Samba had to have daily blood tests to determine the exact time of ovulation. Vaccinations and wormings were up to date. Once the pups put in an appearance, the costs accelerated.

There was the initial first day exam to be sure mother and babies were healthy. On day four dew claws were removed. When we got Samba, she still had her dew claws and when she was two, she tore both of them, resulting in great pain. She had them surgically removed, which is a much more serious procedure when done on an adult.

There were wormings and puppy vaccinations. Each pup had a micro-chip implanted between their shoulders to identify them if they should get lost. The chips were registered with Companion Animal Recovery, run by the AKC and with Avid, the maker of the chip. All pups were registered with the American Kennel Club and The United Kennel Club. They each had their DNA profile done. 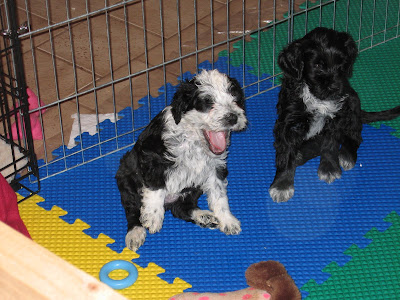 When I interviewed buyers, they were required to fill out a questionnaire and in phone and face to face meetings they were asked about their experience with dogs and their plans for this dog. If we agreed on the adoption, they were given a full pedigree, DNA profile, copies of all health certificates of the parents, registration papers, chip registrations with my name as back-up contact. They were supplied with the dog food the pups was currently eating plus nutrition info on the current food as well as the food the new owner planned to use. They were provided with emergency phone numbers of my vet, poison control, etc.

It was made clear to the new owners that if ever in the lifetime of the dog,they were unable to keep it for any reason, I would take the dog back. I brought those pups into the world and I will always be responsible for them. They are not under any circumstances to wind up in a shelter. I will always be available to them to answer questions or give whatever help I can.

I love mixed breed dogs. I currently have two and I mourn the loss of Monty and Lucy, but I am not in favor of intentionally breeding mixed breed dogs. Accidents happen and the pups from those accidents deserve loving homes for their entire lives, but to breed a mutt, then turn it over to someone and forget about it is totally wrong. Those breeders don't know or care if that puppy is thrown away because it was too much trouble to care for it.

Thank goodness for no-kill shelters, foster homes and the many good people who spend their time and money helping those animals find a forever home. 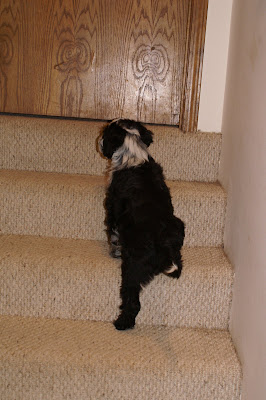 Amen. All the photos are sweet, but that last one just really makes me smile.

Thank you Sue for such great info, I have learned a lot about dogs from your blog. I don't think people realize the time, money and commitment it takes to raising a wonderful little animal. When I look at your photos of those beautiful little puppies I wonder how you managed to get any work done around your house, I would be wanting to play with them constantly!
x

I keep regretting neutering our mutt Cove, as I think that Covydoodles would have been the next big fad.... They'd sell like hotcakes at the local petstore! Blue merle, pointed mutt things!

If people were lucky, like him, the puppies would have hip dysplasia, seizures, and over flexing (painful) pasterns. You know, mutts are SO much healthier than purebreds, which is why my 5 year old mutt, acts like a 13+ year old well-bred dog!

I'm sure if I had kept him intact, and peddled his kids, his reproductive organs could EASILY cover his medical costs, at the very least. ;)

Just yesterday I dropped in the local 'crap store' for sick humor sake. They had a Siberian for $999 (Good breeders tend to charge less than $500 for them locally), Many grand + Poos and Doodles (Each of my show dogs cost me under a grand...), and a Shiba Mo (WTH!?! Turns out it's Shiba x Am Eskimo...) Oh and Shiba Mos are always VERY good with kids BTW. ;)

I don't get how people fall for the "Doodle, Shih, Poo" 'hybrid' hype. I mean honestly, how DUMB are people?