Today is a catch up day. Someone asked about Morgan's leg. At Christmas she was diagnosed with a torn tendon in her ankle. She's doing great. She's not limping or showing any signs of pain. We had to stop her pain meds early because they seemed to be interacting with her anxiety meds. I lifted her on and off furniture and carried her down the stairs. That's when I realized how much weight she's gained, so Morgan has been on a diet since the start of January. Yesterday she had a weigh in and she's lost two pounds. 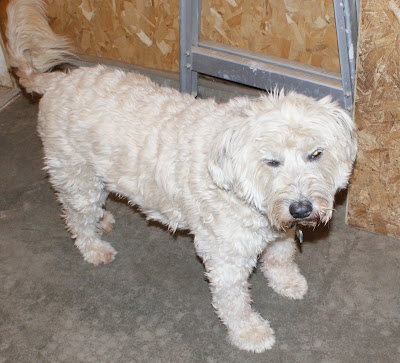 I think Morgan has been grieving over Monty's death. She seemed to have a setback in dealing with her anxiety. She had some of her 'crazy' episodes when she was out of control and didn't seem to know where she was. We're helping her thru those times by leashing her to us, so she doesn't get lost.

Sometimes it pays to whine a little. Last week I shared my enormous pile of unfinished baby items. Several blogging friends said they would help if they lived closer. I thank them. One nearby friend read the blog that day and called to volunteer. Yeah !! As soon as the ice melts we're going to have a finishing bee with hot tea and hot gossip.

Speaking of UFOs, I've decided to tackle one or two a day and plow thru them. Here are a couple that I finished up this week. 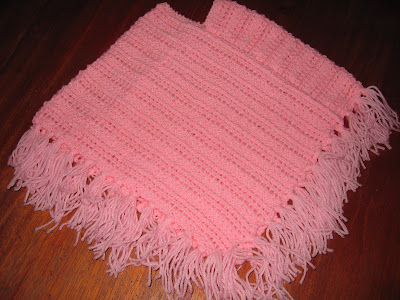 This one is a pint sized poncho for a baby, maybe 3 or 4 months old. It was knit, I just added fringe. 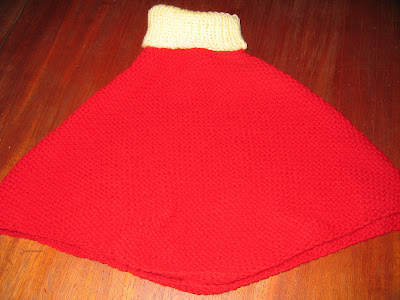 Here's another little poncho, slightly larger than the pink one. I think I need to add yellow fringe to this one. I hate fringing, but this just needs something more. This is an ancient pattern that I wrote out on a napkin in a restaurant one day. I've made dozens of these in toddler size and sold them for extra cash when I was younger. I found the napkin one day last year when I was going thru a box of old letters. 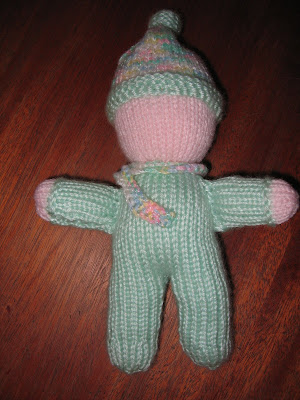 I made this last night while watching CSI. It's for a specific purpose, but it's a secret until next week.

I'm starting a project tonight that I've been thinking about for a long time. First I have to wade thru the library where my yarn stash is spread out and locate the appropriate yarns. I also have a sewing project that I want to get started on. I'm finally going to conquer my fear of that new sewing machine.

Sky has been vomiting every day for the past week. I talked to Dr Nicki yesterday about it. He inhales his food. I set his bowl down and by the time I put Noah's down, Sky's finished. I'm sure he's just eating so fast that it's coming back up. I fasted him for 24 hours, then started hand feeding him one piece at a time, but he still just swallows it without chewing. Now I have him on special food for a few days and I'm getting him one of those bowls designed with bumps in it to slow him down. So far today he hasn't vomited. If it continues, he'll go visit the Doctors on Monday for a check up. 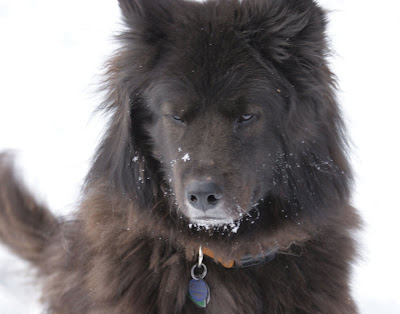 Tsar is spending as much time as possible outside. Last night at 11:30 he wanted me to play with him. He was racing around the yard, then would come up to me and toss snow toward me. He wanted me to kick snow on him. Then he grabbed a stick and started throwing it in the air and catching it. I wanted to go to bed. I had to play for a few minutes before he'd come in. I think he's looking too thin and I'm trying to get him to eat more. I never thought I'd be begging a dog to eat. 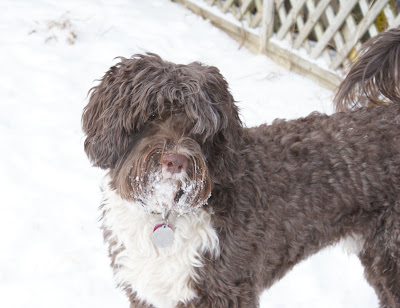 There's nothing new with Fudge. I just liked this picture. He and I are going to start our training again. We've slacked off since the trial. Now I just occasionally give him the commands. I want to get back into a real routine so we're ready for the next trial. We're going to get that title this time.
Posted by Sue at 12:09 PM

Your dogs are so lovely... as are your FOs.

Mugsy used to demand that I come play in the snow with him. Silly dogs!

Lovely pics again Sue, I sure like having my doggy fix everday!

dudley eats with one of those bowls and occassionally will still yak up his breakfast. The other morning I was downstairs winding yarn, when I came up, he was in a corner of the landing re-eating his breakfast! Gross.

Hope your kids are okay. Your finishing is coming along. I love that little baby. Too sweet. g

I love seeing your dogs--they are all so adorable and full of personality. Sorry you're having to deal with health stuff on some of them. I guess that goes with the territory, but it's never fun.

I'm going to catch up on some of your older posts now that I've stopped worrying about "big government". LOL

Give everyone a hug from me!