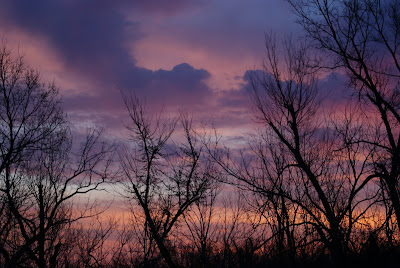 Yesterday morning at 6:18 the sky looked like this. I was standing there watching the pups run around the yard and ran to grab the camera. The old poem applied, 'Red sky in the morning, sailors take warning'. It started to rain a short time after this. It's been very windy all week and was cold a few days ago with snow flurries in the air. 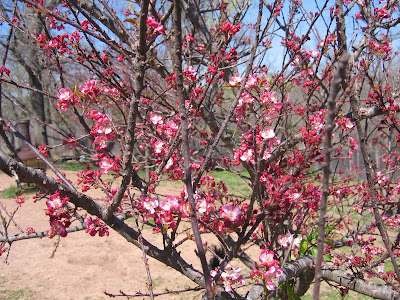 The crabapple trees are finally blooming. 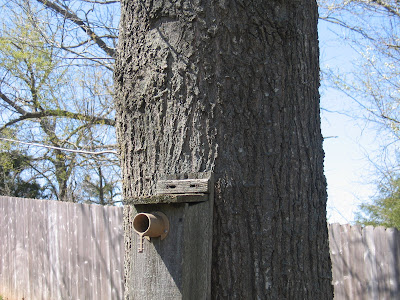 This nest box used to be busy every year, but now there's too much activity in the yard. The birds feel insecure with all the dogs running around. 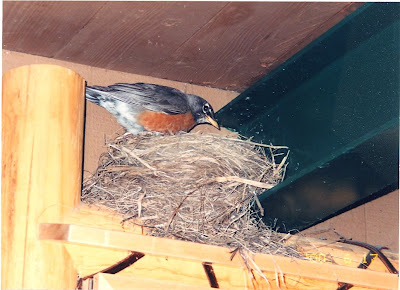 Those enterprising birds are finding places high out of the reach of snoopy dogs to build their nests. Remember a few weeks ago Bailey stole my watering can? When I took it away from her I stuck it on top of a bale of wire sitting in the yard. A pair of birds started building a nest in it. I was afraid the dogs would show too much interest in the comings and goings of the parent birds, so we moved the can to the deck steps safely behind a gate. This morning I saw a little sparrow going into the watering can. I guess they decided the new location was safe. I'll try to get a picture this weekend of the nest. 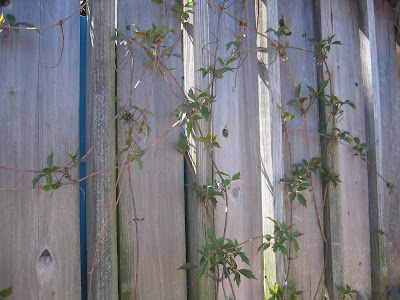 My clematis on the deck is coming to life. It has pretty little pink flowers. Unfortunately, Norma Jean is fascinated by the vine and I catch her tugging on it sometimes. I hope it survives. 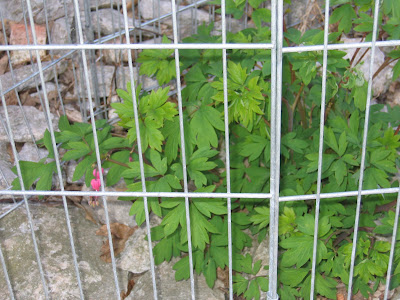 The bleeding heart has to live behind a cage because it's toxic to dogs and of course they are attracted to the flowers. 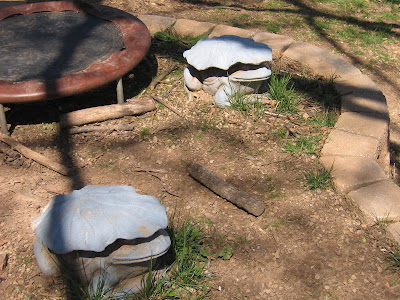 These are the guard frogs. They're supposed to be garden seats, but they're a bit inconvenient for anyone over three feet tall. 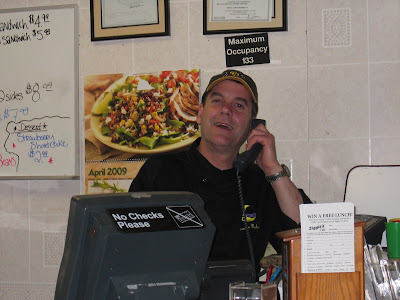 Our friend Brendan has been serving some of my favorite dishes at the restaurant lately. During a casual conversation a few weeks ago we discussed what foods I liked best. Suddenly they've been appearing on the menu. How's that for service? 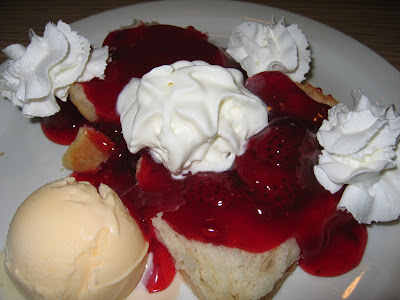 The very first strawberry shortcake of the year.

Back when we had five dogs we held an Easter biscuit hunt. Rob took the dogs outside while I hid biscuits around the house. When we brought them in and showed them what to do I was surprised by the results. Four of the five caught on right away and started rushing around looking for biscuits. Monty won. We were amazed that he was so good at finding them. Samba was second and Lucy and Tsar each found several. Morgan didn't understand what she was supposed to do and just followed the others around. 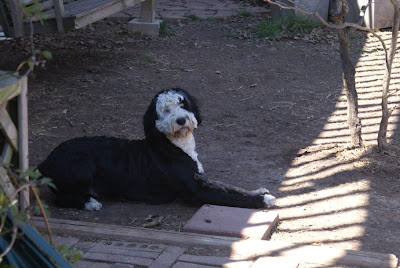 This year we're going to try again. With ten dogs we're going to hold the hunt outside. The forecast for Sunday is rain, so we'll probably try to do it on Saturday. We don't want soggy biscuits. I'll be sure to take pictures and let you all get a good laugh. Norma Jean is looking forward to the great Easter Biscuit Hunt.
Posted by Sue at 1:02 AM

Yes, Sue, you can certainly borrow what Andy Rooney wrote about women over 40.

Glad you stopped by.

Lovely post! From a beautiful sky to flowers to luscious food to darling dogs. You have it all!!

I hope Norma Jean finds a good few. The mental image of her tugging on your pretty vines gave me more joy than I should admit.

(Gretchen chewed the heel off of the black heels I bought in December to replace the pair Sissy chewed as a pup...)

Lovely pic's Sue. There is always so much activity this time of year in the garden. I always love it when a little bird decides that our garden would make a good home. An Easter dog biscuit hunt sounds like so much fun, I sure wish I coild be there to see them.
x

And your photos are wonderful!

what a fun idea...we don't do anything at all on easter sunday...and that cake looks fabulously yummy. enjoy the weekdn sue.oh and that sky is amazing.

Your garden's looking lovely...and how exciting that you have nests :D
The strawberry shortcake had me drooling....the closest thing I have in the house is a Jammy Dodger which will have to do!
Looking forward to your Easter biscuit hunt....can we come? Hehe ;)
Have a great Easter guys n gals!
Slobbers xx

Thanks for visiting my blog! I love meeting new friends. I've seen a few Portuguese Water Dogs on my island, but my family and I are not sure if there is a breeder here or if they came from the mainland. I usually see them with their hoomans in the water holes that line the coastline of my island. Your breed are GREAT swimmers! I like to swim too, but my mom doesn't trust me with the big ocean waves. I keep reminding my mom of my big webbed feet, but she keeps insisting that I'll get swept away into the Atlantic. Silly hoomans. Those PWDs get to have all the fun. Have you been to Portugal or the Azores before? Would you mind if I link your blog on mine so I can keep up with your adventures?

Great pics! Our apple trees aren't blooming yet... and I haven't checked for our nesting robins yet either, but they are definitely around!

hi porties...you're right...noah should have been in the black and white post!! lookin' good on the dessert end...gee pretty cool ask and it appears! such control - it would be to dangerous...lets see, cheesecake and baklava, and chocolate hazelnut mousse...ahhhhh oopsy a little bit of the humomm has leeched into my post..... dog biscuits!!
theBUSTER, Ms.Persephone, &Ms.Blue