Rob and I enjoy watching CSI. We find it amusing the lengths they go to to find a single hair or a faint smear of blood. We can't imagine actual detectives going to those extremes.

When I think about my house, I really get a good laugh. There are so many hairs in this place it would take the entire team the rest of their natural lives to figure it out. 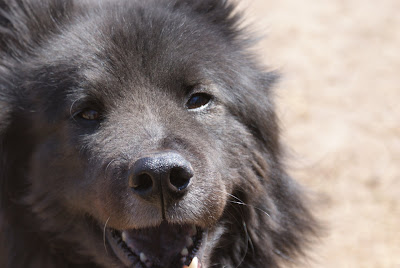 I also think about the evening that Fudge went into one of his super spins in excitement over going outside and we didn't realize he was spinning on a carpet tack. He tore a nice little round hole in his pad and we only realized it when our tan carpet in the den started looking like a crime scene. There was blood everywhere as he continued to spin and run in circles.

I finally was able to grab him and stick him in the bathtub to examine his foot and apply pressure to stop the bleeding. Rob got out the carpet cleaning machine and started shampooing the carpet before the blood set. I don't think there was an inch he hadn't sprayed. What would the CIS team think of that scene?

Speaking of Fudge, he has a fan club and every fan club needs a President. Gaylen has offered to be President and Fudge is thrilled. The problem is it's a paid position and Fudge has no money. 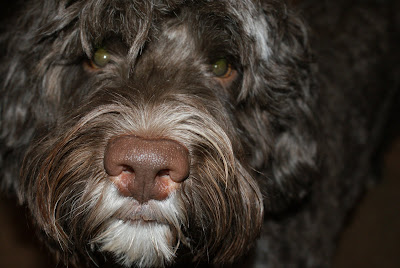 As you can see he was worried about this situation. He thought about his possessions and what he could afford to part with. He has his collar, but he needs it for when he goes for walks. He has his little house, but he sleeps in that at night. He has his dinner bowl, but how could he eat without it? Then it came to him. He has something else that he can pay Gaylen with. 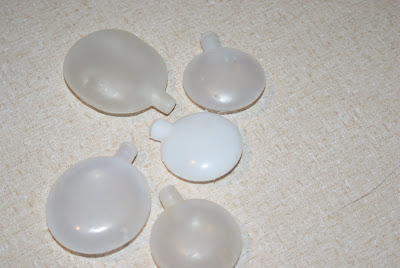 He has all these perfectly good squeakers that he and his family members have removed from their toys. I won't let them chew the squeaker so they're just there on the counter not doing anything. He can send them to President Gaylen as payment and there are a lot more where they came from. He and the others can go to work keeping her in a constant supply of squeakers. Problem solved.


Back to fibers, but of a different variety. I've been trying to decide on a knitting project. I have a few little ones in mind, but I need a big complicated one to work on. I saw this sweater coat and fell madly in love with it. 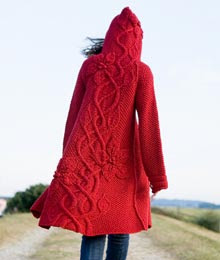 Isn't it pretty? Unfortunately, I've been on Ravelry reading comments about it and there seems to be a serious problem in the guage and sizing. I don't know if I want to get into something that I know has some built in problems. I don't want that complicated a pattern.

At the fabric store this week I saw this magazine and was immediately struck by this piece on the cover. 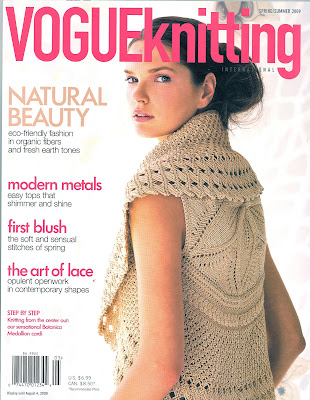 It's circular with armholes and I think it's really intriguing. I think I'd like to make it, but I don't really know if it's something I would wear. Maybe back twenty years ago when I was into clothes more than I am now, I would have worn it. Now I dress in things that can hold up to muddy feet jumping on them. Anyway, I might try it and give it away as a gift . 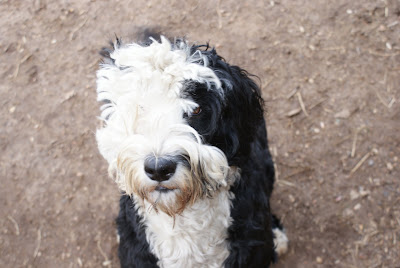 So you see CSI would just love this place. We have hair, fibers of many varieties, foot prints, sometimes bloody footprints, torn blankets and bits of cotton stuffing under chairs. We could keep the show on the air forever.
Posted by Sue at 1:52 PM

I want to do that vest too. Isn't it lovely?!

We've had the same laughs, only our shows of choice are House and NCIS. There's still blood on the walls here and there (I'm sure a black light would show it, despite my scrubbings) from the boys' battles when they were both intact. There's not an inch of anything below about four feet that doesn't have basset slobber, new and old, on it.

I could keep going, but you know the scene all too well.

Sissy wants to know if there is a family plan for Fudge's fan club. If not, I guess we'll need several applications.

As President, I say yes - A family plan you shall have. And your the second family in the club with the Matlock Houndies being first. Sorry, since I'm the President . . . .

Anyway, Fudge you needn't look so worried. I would have totally taken the position for free. It's not like you're asking me to be your legal council like some other I know need. :)

Cute post - that is a beautiful coat, but with inherent problems I would most likely skip it. The Vogue circle vest is very interesting. I have a friend who knit a similar round vest and it's lovely. The vogue is much, much nicer. g

There are several circular vests out there that I have looked at recently too ... the Vogue one is a little too ... uh vogue-ish for me but the others are more moi!

And Mr. Fudge... he is getting to be quite the celeb ... he might just out-do Beaubama on the cuteness scale, for those of us who like more mature subjects!

This was my favourite episode of CSI ever, too funny!
That coat is so beautiful, such a shame about the problems with the pattern, but the little circular thing is cute too....I wonder if you could crochet something similar....hmmm, interesting idea....
Hurry up Monday, the foot suspense is KILLING me!
Slobbers xx

The sweater coat is very cool. But I love red as well as purple!

Did my email come through yet? I resent it twice, oh I hope it doesn't bounce back! I also sent a draft of that thing you wanted me to do....

skip the coat, knit a house...did you get my email?
there is another award for you on my blog...(glad you took the pink ladybug too). with hugs.

CSI would have great fun in my house as well, what with 1 dog, 1 cat, DD and myself all sheding hair at an alarming rate.