Remember when we were little girls, I'm assuming that most of my readers are women, and we had a best friend. We couldn't wait to see each other every morning to discuss every thought we'd had overnight. We walked and talked for hours, played together and fought. We'd go home in tears because we had argued about something and we knew our friendship was over forever. Usually within the hour the rift was mended and we were happily chatting together again. 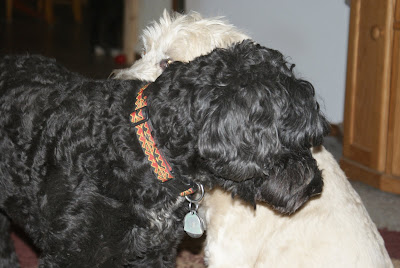 Samba and Morgan are best friends. This meeting took place last night while I was watching House. I happened to have my camera handy so I was able to catch it. 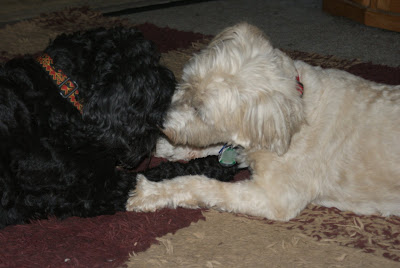 After meeting and whispering to each other, they lie down and nuzzle each other. 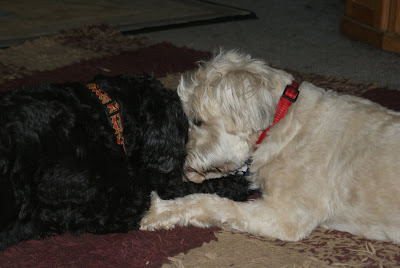 Often they lie with their legs crossed over each other. I wonder what secrets they're whispering. 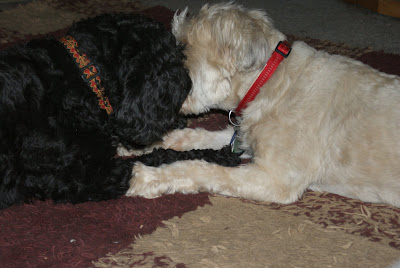 They lick each others faces, ears and feet during these sessions. 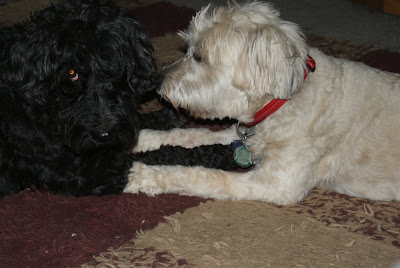 Samba has to check on me now and then. I'm her first priority. 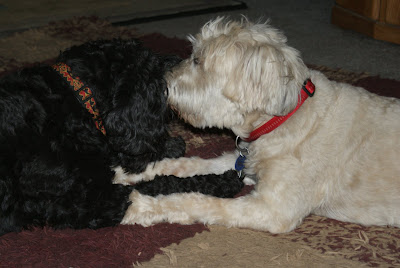 Back to girl talk. 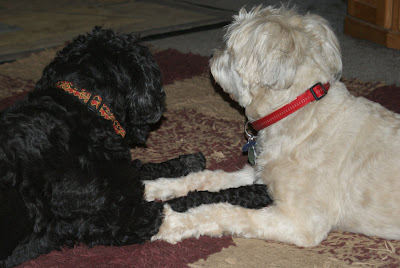 They seem to be thinking about something. Maybe they're hatching plans to raid the cookie jar. 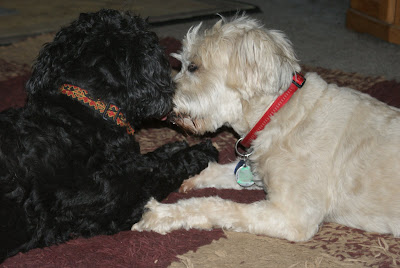 Samba is dominant and Morgan spends a lot of time grooming her. This works in very well with Morgan's OCD. It seems to be a mutually satisfying relationship. 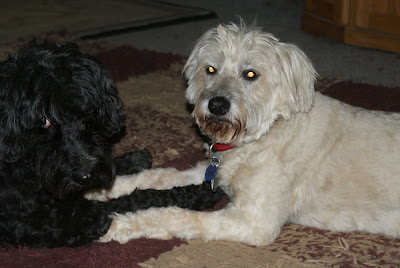 I don't think they were happy about my photographing their girl talk. 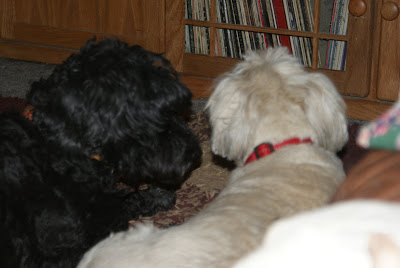 They turned away so I couldn't bother them anymore.

They are both very competitive. When I throw a ball they both want it and a lot of growling goes on between them about who will bring it back. Strangely, Morgan usually wins. They both want to go for rides every time we head for the car. Morgan usually goes, because she can't be trusted at home without supervision since her illness. At times it looks like there's real friction between them, but they're best friends and they get over their differences and play together like sweet little girls.
Posted by Sue at 11:34 AM

How sweet. I love the picture where they are glaring at you for "bothing" them. sweet, sweet girls. g

This is just so sweet. I am glad you were there to take all those lovely pic's. Although I still would love to know what they were talking about!
x

That's neat. Sissy and Gretchen have a very similar relationship. I love the photos, even if you were annoying them.

So sweet... I love it when we have our cameras ready at the right moment!

Sweet seams to be the common word here, but it's true. The nuzzling and snuggling of these girlfriends is so dear. How fortunate you had your camera handy. I'll bet you have a camera handy all day long with your group. We sure benefit!

What a fantastic post. Those dogs are so sweet!